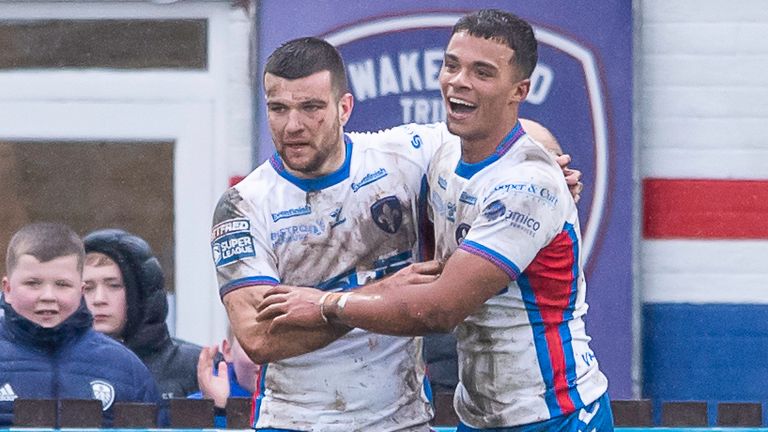 An eight-point haul from former Man of Steel Luke Gale was enough to steer 12-man Hull FC to a tight 16-12 victory over Wakefield Trinity at a sodden Belle Vue.

Gale, who joined the Black and Whites from Leeds Rhinos in the off-season, grabbed a try and kicked two conversions to give his side a winning start to the new season.

Level at 6-6 at half-time after tries from Gale and Corey Hall, Hull FC broke away in the second half when Darnell McIntosh and Joe Lovodua crossed.

But they had to survive a nervy ending after Jake Connor was sent off late on for a high tackle on Lee Gaskell and Tom Johnstone scored for Trinity.

Hull FC started strongly at Belle Vue, and only strong Trinity defence kept them at bay in the opening period.

But 12 minutes in Connor Wynne burst down the left flank and passed inside for Gale to touch down, and the 33-year-old nailed the conversion himself.

Play was stopped 10 minutes later after a heavy challenge on Tom Lineham and after it resumed, Wakefield went on the attack as Gaskell forced a drop-out with a well-placed grubber kick.

ОЩЕ:  Ulster hold on to beat Clermont in Belfast

Off-season signings, Corey Hall, Tom Lineham and Liam Hood all made their debuts for Wakefield Trinity.

Hull FC handed starts to three of their new recruits in Luke Gale – who captained the side – Joe Lovodua and Darnell McIntosh.

However, a knock on in the next set stopped their momentum and the Black and Whites escaped with their try-line intact.

In the wet and cold conditions opportunities were scarce, but four minutes before half-time an error handed Trinity excellent field position to attack from.

The home team hit back after a mistake from Connor near their own try-line, with Johnstone picking up the loose ball and making a 50-metre break downfield.

Johnstone was eventually brought down, but in the next set the ball moved quickly to the left and Hall scored on debut, Max Jowitt adding the extras to tie it up at the break.

In the second half it was the visitors who took the lead just three minutes in, after a huge show and go from debutant forward Lovodua opened the defence up for him to easily cross and the try was converted by Gale.

Seven minutes later the lead was extended when fellow new recruit McIntosh barged over out wide, with Gale’s conversion attempt from the sideline missing as the score remained at 16-6.

Trinity were losing their grip on the game and they battled hard for a response, as Gale’s vital kicking kept them pinned down in their own half.

With 14 minutes left the match was turned on its head when Connor was red carded for his high shot.

Wakefield gave themselves some hope in the 69th minute when Johnstone dived over in the corner and Jowitt converted, cutting the lead back to 16-12. It meant pulses were raised at Belle Vue, but the home side could not find another try as Hull FC bravely held on.

The result came as a relief to under-pressure Black and Whites boss Brett Hodgson too, whose team finished last season disastrously with nine defeats from their final 10 matches.

„I understand where the game’s going with it as far as protecting players, especially long-term. The concussion protocols they’re bringing in, I’m all for it, but I’m not sure looking at most of the games over the course of the weekend if it’s the look that we want, with teams playing with 11 and 12.

„You’ve got people you’re enticing to come and watch a contest. I think some of that is the contest element being taken away when we’ve got players sitting out on the field.“

„I’m feeling tired, probably more than the players. We showed a huge amount of character, I’m really proud of the effort, but we need to improve our discipline. We gave away too many penalties, too many [set restarts].

„I don’t know about the Jake Connor [red card], it didn’t look like a straight red for me. It seemed like a bit of an over-exaggeration.“

Wakefield seek to rebound from their loss on the opening weekend of the season when they travel to Perpignan to face Catalans Dragons on Saturday, February 19 (kick-off 5pm GMT) in a match which is live on Sky Sports.

Hull FC are back in action earlier on the same day when they host reigning champions St Helens, who defeated Catalans in their opening match (kick-off 12.30pm).