Cullen secured his second ProTour title in as many days in Wigan; Michael van Gerwen lost in the second round to Cameron Menzies and world champion Peter Wright was whitewashed in round three by Ryan Joyce

Cullen continued his incredible start to 2022 with a second Players Championship success in as many days, adding to his maiden televised title at the Masters in January.

Victory at Players Championships 3 and 4 sees Cullen go 14 games unbeaten on the PDC Pro Tour, scooping £24,000 in prize money and becoming one of the most in-form players in the sport.

„I’ve felt so much better today, a lot more comfortable,“ said Cullen. „I’m just playing well at the minute and people know I can turn it on at any point.

„I won’t get carried away but even when I’m playing poorly I seem to be winning. Things are going well but it might not last forever so I’m just taking it as it comes.“

The Premier League star began the day with a 6-3 win over Peter Hudson, before victories over Luke Woodhouse and Jermaine Wattimena followed.

Cullen then showed even more quality, averaging 102.52 and 103.17 in defeating Keegan Brown and Rob Cross respectively to set up a semi-final clash with world No 1 Gerwyn Price, a repeat of Thursday’s Premier League action. 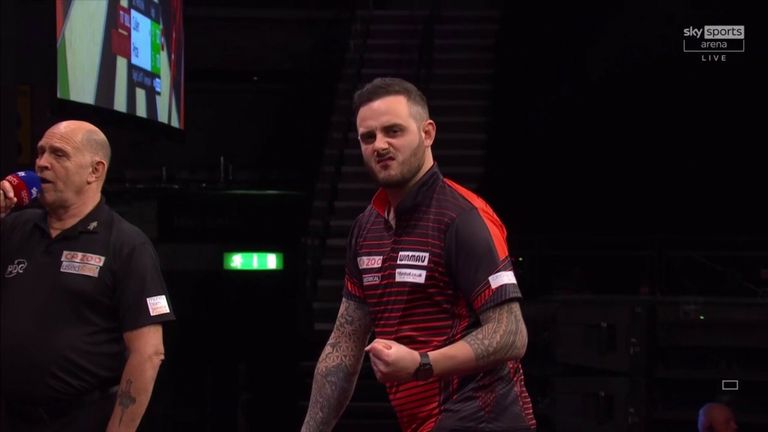 He then defied Price’s average of 102.29 and came from 4-2 down to defeat the former world champion 7-5 to secure his second final in two consecutive days.

Cullen made a statement of intent in the opening stages of the final, taking out back-to-back ton-plus finishes of 104 and 121 respectively to lead Van den Bergh 2-0.

The Belgian then won what would be his only leg of the match before Cullen reeled off six legs on the spin to take home the title, sealing the win with a marvellous 127 checkout on the bull.

Elsewhere at Players Championship 4, Michael van Gerwen had another early exit, losing out in the second round to Cameron Menzies and world champion Peter Wright was whitewashed in round three by Ryan Joyce.

What next for Cullen?

Cullen faces Van Gerwen on Thursday in the latest instalment of Premier League action, with the Englishman looking to go one better than last week’s runner-up finish in Liverpool.

The 2022 PDC ProTour season continues with Players Championships 5 and 6 on March 19-20 at the Barnsley Metrodome.

Check out daily Darts news on skysports.com/darts, our app for mobile devices and our Twitter account @skysportsdarts. We’re back for more Premier League action from The SSE Arena, Belfast next Thursday from 7pm on Sky Sports Arena.

200 лв.
Cullen secured his second ProTour title in as many days in Wigan; Michael van Gerwen lost in the second round to Cameron Menzies and world champion Peter Wright was whitewashed Заложи сега