Jake Bibby and Liam Marshall both crossed twice for Wigan as they opened the 2022 Betfred Super League season with a win at Sewell Group Craven Park; the returning Jai Field also got over for the visitors, with Mikey Lewis and Matt Parcell grabbing Hull KR’s tries Two tries apiece from Jake Bibby and Liam Marshall helped Wigan Warriors get the Matt Peet era under way with a 24-10 win away to Hull Kingston Rovers in the Betfred Super League.

Bibby’s two opportunist tries helped Wigan into an 18-8 lead at the break at Sewell Group Craven Park, with Jai Field crossing for one on his return after a long spell out injured and Marshall landing a sucker punch with a length-of-the-field finish on the counter-attack.

Rovers’ sole score of the first 40 minutes had come on the back of a fine solo run from Mikey Lewis, but Marshall’s second just after the hour proved enough to seal the win for Wigan in their opening fixture in the 2022 campaign.

Having been arguably the fairy-tale story of Super League in 2021 with their rise from bottom of the table to play-off semi-finalists, the opening match of this season proved one to forget for Tony Smith and his Hull KR team.

Both teams were guilty of making plenty of errors while Wigan’s discipline proved problematic for them at times, especially in the first half. However, the hosts failed to make the most of the field position afforded to them and it was the Warriors who took the lead.

Debutant Sam Wood, who endured a tough evening under the high ball, spilled a high kick and Bibby gathered to touch down, with Field adding the extras to make it 6-0.

Soon after though, another Wigan penalty was eventually punished as Lewis opened up a gap with a dummy and raced through to touch down in the corner 18 minutes into the game for an unconverted try.

Hull KR named four debutants in the 17-match matchday squad. Lachlan Coote and Sam Wood both started, while Greg Richards and Frankie Halton were both on the interchange bench.

Cade Cust and Kaide Ellis both made their debuts in the starting XIII for Wigan, with Iain Thornley also back after re-signing from Leigh Centurions. Patrick Mago, another off-season signing, was also among the interchanges. Wigan newcomer Cade Cust asked some very testing questions of the Rovers defence with his smart kicking all night and it was his visionary kick following a scrum which caught the home defence out, with Field latching onto it and racing clear to score.

Another long-range try followed for the Warriors’ third as Marshall ran almost the length of the field when Bibby caught a kick from Jordan Abdull and fed the winger to send him streaking away up the left touchline from close to his own try-line.

Three-quarter Bibby then went from provider to scorer, gathering up another loose ball following a drop from a kick by Wood two minutes before the interval.

The mistakes continued after the break as both sides looked for the opening try of the second period, but Wigan’s defence also came to the fore as Rovers were twice held short as strong Warriors defence preserved their commanding lead. 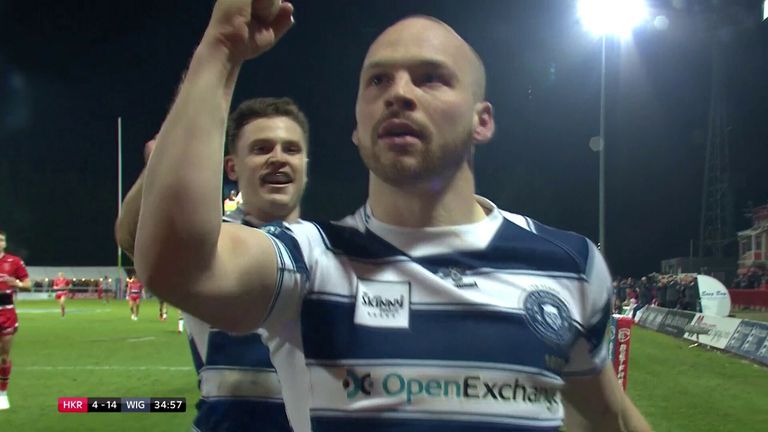 Then when they were awarded an opportunity from a penalty, they showed the home side how to make the most of possession by turning it into a second try out wide on the left for Marshall as the game entered its final quarter. This time, interchange man Zak Hardaker added the extras.

Rovers forced their way over for their second try with seven minutes to go as Matt Parcell dived in to score, Abdull kicking the extras, but it was little more than a consolation. 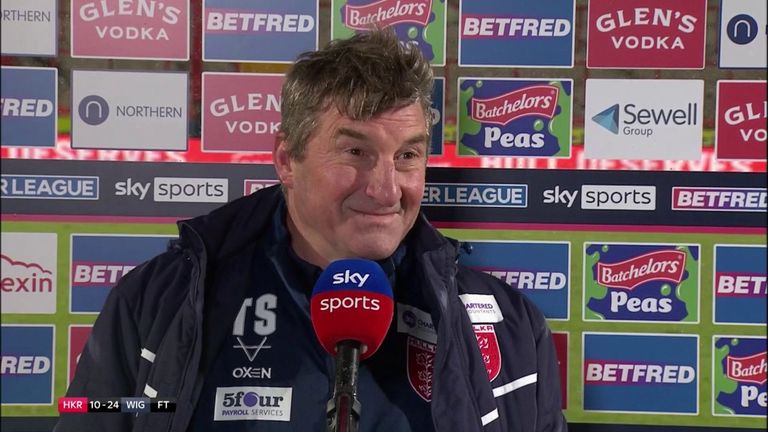 „We got out-played, out-coached and Matty [Peet] in his first game gets a win up – something I definitely didn’t do. But we just got outplayed, really.

„We let them build a game, unfortunately, and we helped them build a game with some of our mistakes and the errors we had. They were much better to the punch, very good on the ground, controlled us really well and thoroughly deserved their win.“ 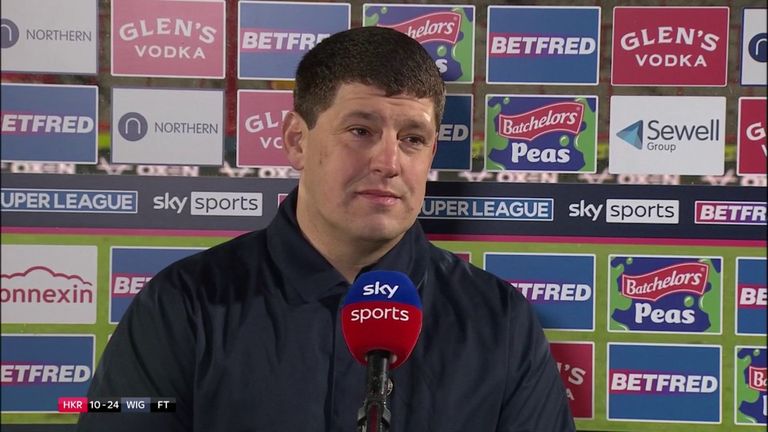 „I’m happy. I thought we played with plenty of spirit, I thought we showed signs of what we’ve been working on with ball movement and we’ve certainly got plenty of improvement in us. I’m just pleased for the group, they worked really hard.

„There were times we lacked a bit of accuracy in our defence and we gave away penalties we can’t afford to give away, but when the game was flowing we looked cohesive, you could tell we’d been practising certain things and the lads played with a smile on their face, which was good to see.“

Wigan are back in action on Sky Sports next Friday when they welcome Leeds Rhinos, who kick off their campaign at home to Warrington Wolves on Saturday, to the DW Stadium (8pm kick-off).

200 лв.
Jake Bibby and Liam Marshall both crossed twice for Wigan as they opened the 2022 Betfred Super League season with a win at Sewell Group Craven Park; the returning Jai Заложи сега