Eriksen: My heart will be safest on the pitch 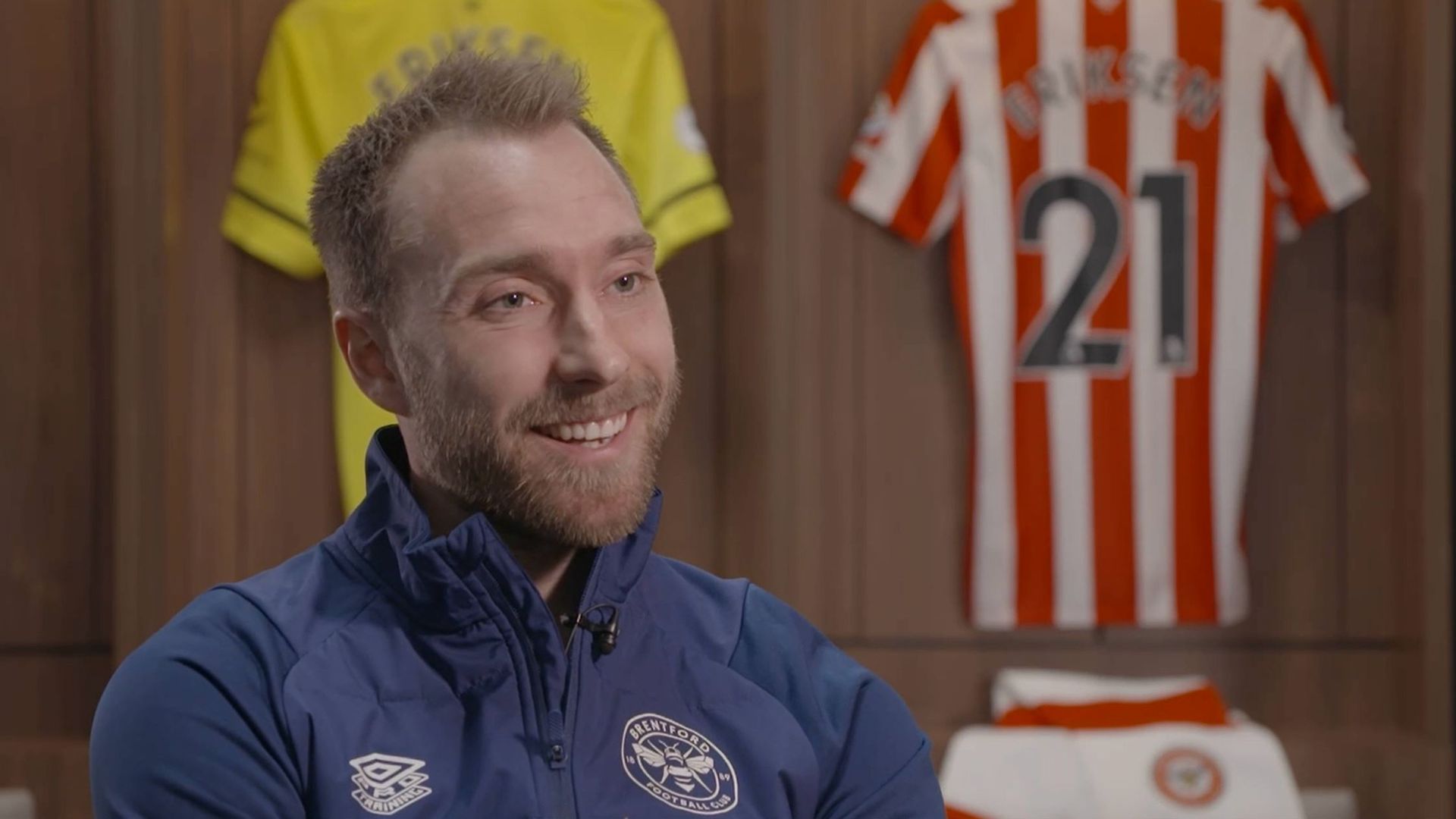 Christian Eriksen insists his heart will be the safest on the pitch when he finally returns to football with Brentford, because it has an ICD fitted.

The 29-year-old is closing in on making a remarkable comeback less than a year after suffering a cardiac arrest at the European Championships playing for Denmark, thanks to the capabilities of modern science, after joining Brentford on a six-month contract until the summer.

Eriksen will be the first known Premier League player with an Implantable Cardioverter Defibrillator (ICD) fitted and the midfielder is confident the device, which responds to life-threatening rhythms and can shock to reset the heart-rate and prevent sudden cardiac arrest, will ensure there will not be a repeat of the incident last summer.

Speaking exclusively to Sky Sports News in a wide-ranging interview, Eriksen says his family are fully on board with his comeback, there are no limits to what he can do with ICD fitted, he thought of Brentford even before they called him, and that – although he won’t be available this weekend – his return is not that far away.

„I agree that this is an example of modern science,“ he said from the dressing room at Brentford’s Community stadium. „I’d heard of an ICD before, but I’ve never known as much about it as I do now.

„In positive terms, now a lot people in the world know that if you have something and you get an ICD, it doesn’t stop your world from living. It depends on the diagnosis but, with this, you are more safe with this than anyone else. Christian Eriksen says he is hoping to prove he can still play football at the top level at his new club Brentford.

„I spoke to Daley Blind (who plays for Ajax with an ICD). I’ve seen him a few times in Amsterdam since, and even in the first week in hospital I texted him from hospital asking ‘what can I do with this?’ He is the more famous example that it can be doable. But, for the common world, it’s more new. In hospital you hear that an ICD is more normal and it doesn’t stop you doing anything.

„It was pretty early in the hospital I was told that, with an ICD there are no limits. You just have to let it heal for a few months, and after you can do whatever you’re capable of. It was pretty quick that I wanted to go back but I didn’t want to do anything pushy.

„So I went to see some doctors and made a program for three or four months, which I have been following until the end of December – a lot of testing and training. Luckily it’s been going well. It’s been a long process but my mind started early to see if I can play again, and luckily I can.

„I didn’t have any doubts I could come back, because it was really a slow, controlled process. The tough part is you have to push yourself, because I’m not pushing anyone. No one is pushing me. It’s me pushing myself. Mentally that was the biggest challenge. Mentally I’m ready.“

Eriksen has already spoken of the chilling incident in Copenhagen last June 12, when he was „gone“ for several minutes as he collapsed towards the end of the first half.

The former Tottenham and Inter Milan star says he does not remember those moments but seeing what it has done to his family, friends and team-mates has changed his outlook on life, if not on football. „On life first and most (it has changed me),“ he said. „It has been just another proof that the family is more important now than it was before.You do look at it differently, and look at your kids differently.

„But in football terms, not that much. The enjoyment was there before. Even now, seven months not playing, the enjoyment is quickly coming back. I will be appreciating my life, that I’m here. I’ve done that for the last seven months.

„They have really been following it and also I think that’s made them more safe and trustworthy, seeing how much work I’ve put in, how much I trust the doctors in what they have done. Then it’s only to trust them as they trust me, and trust the doctors.“

Eriksen had other offers from other clubs but surprised the football community by signing for newly-promoted Brentford – and he insists it was an easy decision to make due to the strong Danish contingent at the club.

Danish manager Thomas Frank, who coached him as a youngster, called him in December to see if he would be ready and willing, but Eriksen has revealed he had thought of them even before that call was made.

„It started with the first phone call in December from Thomas, saying hi and asking how far away I am. At the time, I wasn’t really in the public eye in terms of how far away I was training with a team. I didn’t want to say anything if I didn’t know where I was body-wise, health-wise. But then the process started.

„Thomas called, we had a few phone calls, and there was some interest from other clubs. But the mix with Brentford was in my mind even before they called. From the outside it would be one of the easiest clubs to get into as a Danish guy who knows the coach. For the family it’s perfect – we were in north London a long time and know the areas. It was easy for family and football to pick Brentford.

„There are a lot of Danish people here. I wouldn’t call it a Danish family, I would call it a mixed family. I’ve only been here a week, but I can see how happy people are here. It’s a good environment with some good players and good people.

„I first heard of Brentford when they started getting all the Danish guys. I was at Tottenham at the time, so a few years ago. I knew some of the players here – (Henrik) Dalsgaard and (Andreas) Bjelland – and some of the young kids. So I knew about them from early on.

„The training ground is a humble place, compared to what I’ve seen before. You have what you need. The people are nice. The pitches are decent, and I have some good team-mates.

ОЩЕ:  Langer quit Australia role 'due to lack of player and board support'

„I told them on the first day there is no reason to go easy on me. I wouldn’t play football if that was the case. I said if there are any questions they can ask, but then on the pitch I am just a football player. Nothing has changed.“

So when will he make his debut? Eriksen will not be in contention for this weekend’s clash with Crystal Palace on Saturday, as the Bees look to halt a slide down the table, but there is one game he insists he will play in; at home to former club Spurs.

That is far away into April, so Eriksen says he will be playing long before that, but it will be a poignant one given Antonio Conte recently reiterated that the door is always open for Eriksen at Tottenham, following a chance encounter at a London hotel last weekend.

„I’m taking it one day at a time and seeing how I feel,“ he said. „Every day it gets easier and easier to join in with the level of intensity, running-wise and technical-wise. It won’t be far off. Let’s see what happens. I’ll be playing before the Tottenham game for sure.

„My first target was to get back to full fitness, be able to play a Premier League game, and play as many minutes as possible to show and prove I can still play football in a good way. I want to help Brentford stay in the league, obviously, and then there will be a good few games left.

„It was nice (to hear Antonio Conte’s comments). I’m happy to have open doors. I was there for a long time. To bump into Conte (at hotel at weekend) was a big surprise. It was nice to speak to him; I haven’t seen him since we won the league.

„I could consider staying at Brentford longer. It all depends on the situation. I haven’t thought of anything, staying or going. It’s about taking the moment and playing football. I haven’t made any decisions so far but it’s a very nice place to be.

„Let’s see what the future holds. I’m at Brentford now and that’s where my focus.“

200 лв.
Christian Eriksen insists his heart will be the safest on the pitch when he finally returns to football with Brentford, because it has an ICD fitted. The 29-year-old is closing Заложи сега