„It’s huge for Irish golf,“ says Leona Maguire as she breaks duck on LPGA Tour with magnificent final round 67; Maguire finishes three shots ahead of Lexi Thompson in Florida 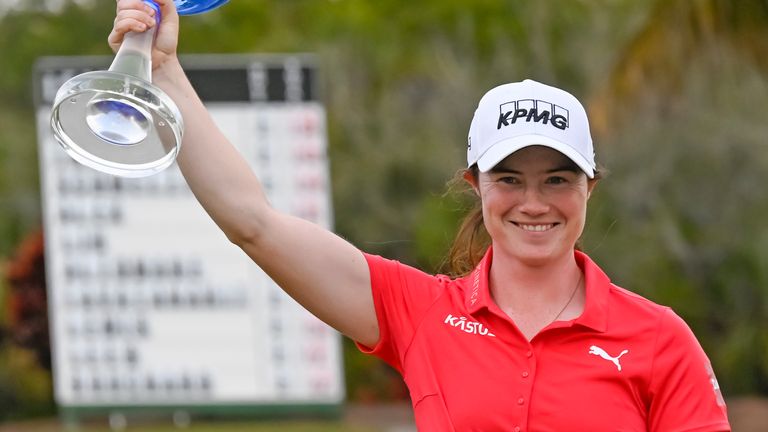 Leona Maguire claimed a superb maiden LPGA title at the Drive On Championship on Sunday, making history as the first Irish female golfer to win on the tour.

Maguire, 27, sealed her win with a final round of 67 which included seven birdies, as she finished on 18 under par and clinched a three-shot victory over nearest challenger Lexi Thompson.

She joined the tour in 2018 but her victory in Florida is undoubtedly a breakthrough for her career.

„I have a lot of people to thank and it’s been a long road, but it’s probably more relief than anything else. It’s huge for Irish golf.“

Maguire, playing in her 50th LPGA tournament, went into the final round tied for the lead with American Marina Alex, four
strokes clear of Brittany Altomare, Stacy Lewis and Sweden’s Linnea Johansson.

But she pulled away on the back nine with a majestic display of ball-striking.

Maguire had an early birdie and a bogey, then ran off five birdies in a seven-hole stretch from the seventh to the 13th.

„I knew my game was close,“ Maguire, who also birdied the 16th, said. „I did a lot of hard work in the offseason.“

„Leona had a great day,“ Alex said. „It was really awesome to watch her play.

„She really got into a groove there kind of like middle of the front and into that back nine, made a ton of birdies. So just had a push to try and keep up with her. Didn’ really work out, but that’s OK.“