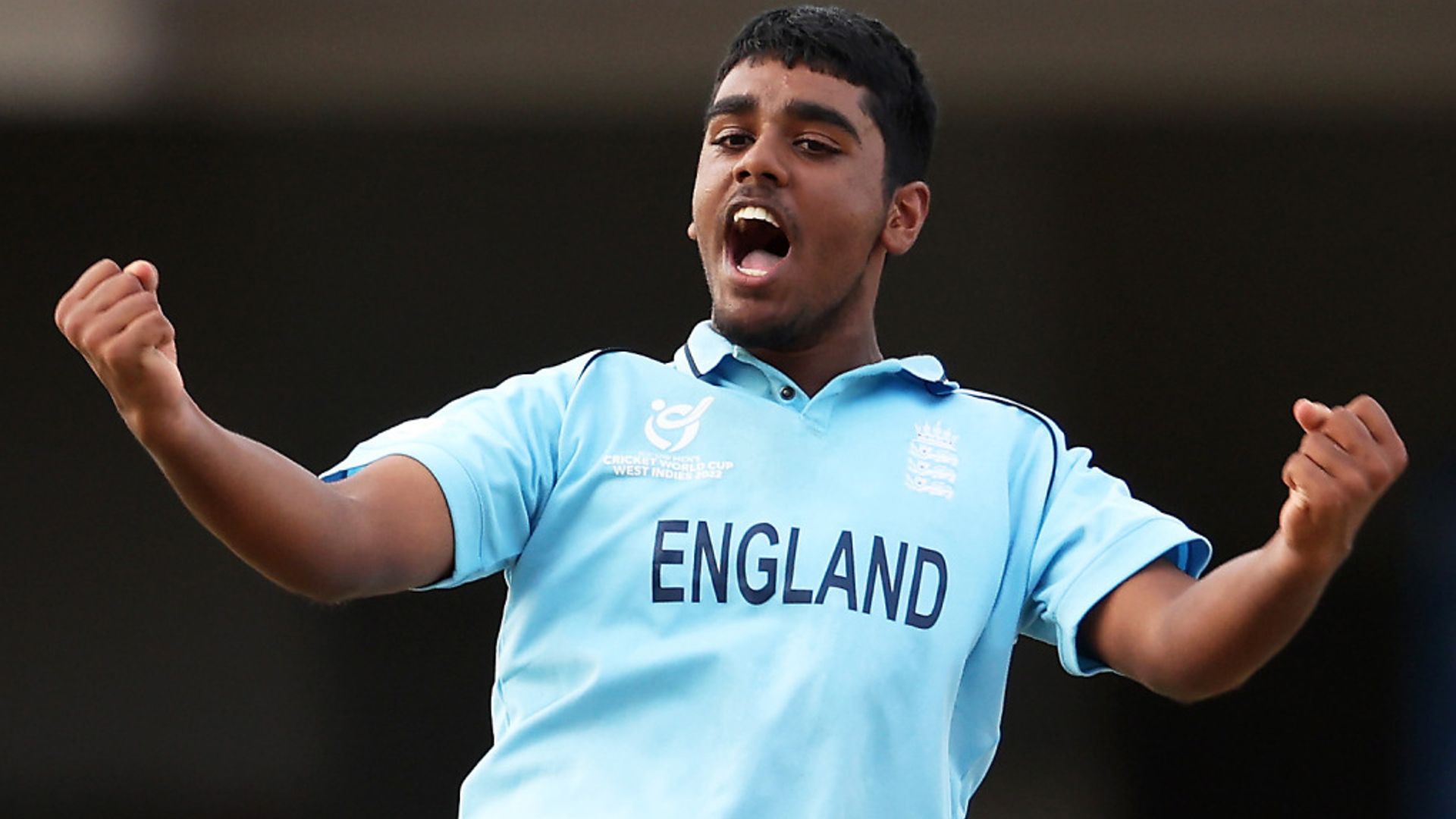 Rehan Ahmed dismissed Joe Root, Ben Stokes and Sir Alastair Cook at the age of just 13 and was in the spotlight again on Tuesday, taking three wickets in an over as England Under-19s reached the World Cup final; watch the showdown vs India, from 12.30pm, Saturday on Sky Sports Cricket 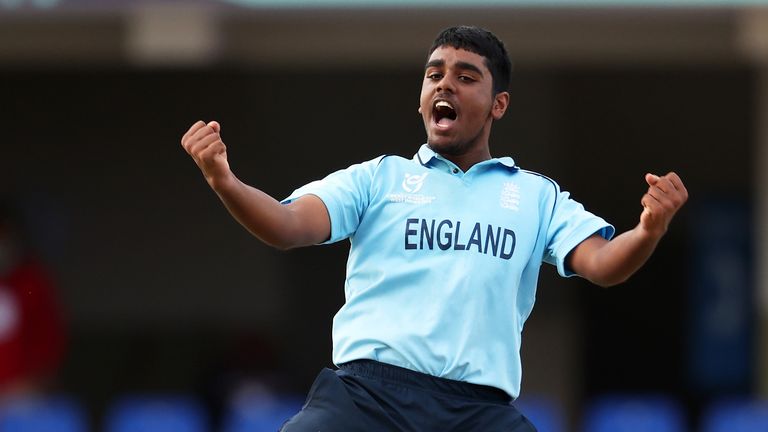 England’s hopes of a reaching a first Under-19 World Cup final in 24 years were slipping away.

Afghanistan required only 23 runs from the final 18 deliveries of Tuesday’s rain-reduced semi-final in Antigua once Northamptonshire seamer James Sales shipped a whopping 20 from an eight-ball 44th over.

England needed their other bowlers to stand up – and stand up they did as Tom Prest’s side rallied to record a 15-run victory and make it into Saturday’s showpiece against India (12.30pm, Sky Sports Cricket).

Lancashire paceman Josh Boyden conceded only six runs combined across the 45th and 47th overs and deserves huge credit, but the star of the show was Leicestershire leg-spinner Rehan Ahmed, a man no stranger to the limelight.

Back in 2017, at the age of just 13, he linked up with England as a net bowler at Lord’s and went on to dismiss Joe Root, Ben Stokes and Sir Alastair Cook – a trio many an international cricketer would love to have on their CV.

In the World Cup semi-final earlier this week, Ahmed struck three times in the space of just five balls, and conceded only one run, during a 46th-over that dragged the game firmly back the way of England.

His series of googlies – admittedly not all of them landed perfectly – causing Afghanistan’s undoing.

England are now just one win away from emulating Owais Shah’s 1998 champions. Shah captained an England squad including Rob Key and Graeme Swann to victory over New Zealand in that year’s final, in what remains the nation’s sole Under-19 World Cup trophy to date. Thanks to Ahmed, that tally could now double in the Caribbean this weekend.

So, what was going through the youngster’s mind when he stepped up to bowl the penultimate over against Afghanistan, knowing his opponents needed just 19 runs?

„I am always thinking wickets, but when I initially came back on I was thinking of keeping Afghanistan to a dot ball or one run,“ the spinner told Sky Sports on the eve of the final.

„As soon as I got a wicket first ball, I was like ‘instead of trying to save runs, I can win the game in this over’. My plan was to hit the stumps as much as I could.

„The googly is my go-to ball and it worked quite well because the batters would be hitting against the wind into the bigger boundary, so it was definitely the ball to bowl in that situation.

„I am not saying I got lucky – but I did kind of get lucky! I bowled a couple of good balls but a couple could have gone for six any other day.“

Ahmed had requested that skipper Prest take him out of the attack earlier in the innings after an expensive start – but relished the pressure of returning later on.

ОЩЕ:  Morris to Boro: Let Derby move on and take me to court instead

„I love challenges. I feel as comfortable at the death as I do in the 10th over.

„I told Presty after my first couple of overs that I was leaking too many runs and he should take me off and put someone on who is going to bowl dots.

„I was annoyed that I wasn’t contributing but I knew I could deliver at the end if needed and that’s what happened. It was a great feeling. I always tell the captain I am ready when he needs me.“

Great finish to the @englandcricket U19s semi final! How good seeing a leggie and a lanky close it out! Good luck in the final lads 👏👏 especially the @lancscricket boys 🌹

Ahmed, who does not turn 18 until August, was first used as a net bowler by England at the tender age of 11 in 2016. So impressive was he, that he was called back a year later and subsequently knocked off Root, Cook and Stokes.

The Nottingham-born bowler explains: „I had Root caught at extra-cover but it was still Root so I’m going to claim it! Stokes was nicked off and so was Cook.

„That was a major point in my short cricketing career so far. I was bowling to international players and bowling well. That was the time where I thought, ‘I want to play cricket for a living’.

„It made me realise that if I get my head down over the next five years, with batting and bowling, I should be in an alright place. Since then I have been crazy about cricket.“

Ahmed was spared media duties back then but the sparky spinner has been doing the rounds ahead of Saturday’s final, having played such a crucial role in getting England to that stage.

He has now picked up 12 wickets across his last three games with his four scalps in the semi-final – he also struck in the 40th over against Afghanistan – following four-wicket hauls against UAE in the group phase and South Africa in the quarter-finals.

Ahmed puts much of his success down the influence of head coach, and former Gloucestershire, Northamptonshire and Yorkshire spinner, Richard Dawson – who has been touted as a potential interim appointment for the senior team’s Test tour of the Caribbean following the exit of Chris Silverwood.

„Daws is an unbelievable spin coach. I think my bowling has improved so much under him. What I really like about him is that he is quite a simple coach, you don’t really get confused when he is speaking. He talks more about feel and mental stuff.“

Under Dawson’s tutelage, England Under-19s have won all five of their matches at the World Cup – crushing Canada and Bangladesh in their first two matches – and Ahmed is not surprised by the side’s success. 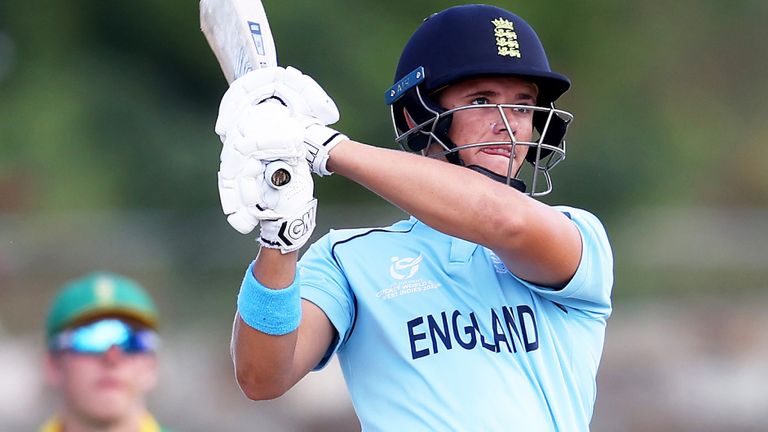 „We came into this competition knowing that even if we play 75 per cent of our best cricket we will win the competition.

„We worked very hard and bonded as a group in Sri Lanka and the West Indies last year. We have learnt from our mistakes after losing in Sri Lanka.

„It is a dream come true for all of us just to get to the final but this is not our end goal – we want to get our hands on the trophy. It would mean everything.

„It has been 24 years since England won this competition so it would be a massive achievement for us. We do feel we deserve it.“

Will England win the Under-19 Cricket World Cup? Watch the final, against India, live on Saturday from 12.30pm on Sky Sports Cricket.

200 лв.
Rehan Ahmed dismissed Joe Root, Ben Stokes and Sir Alastair Cook at the age of just 13 and was in the spotlight again on Tuesday, taking three wickets in an Заложи сега