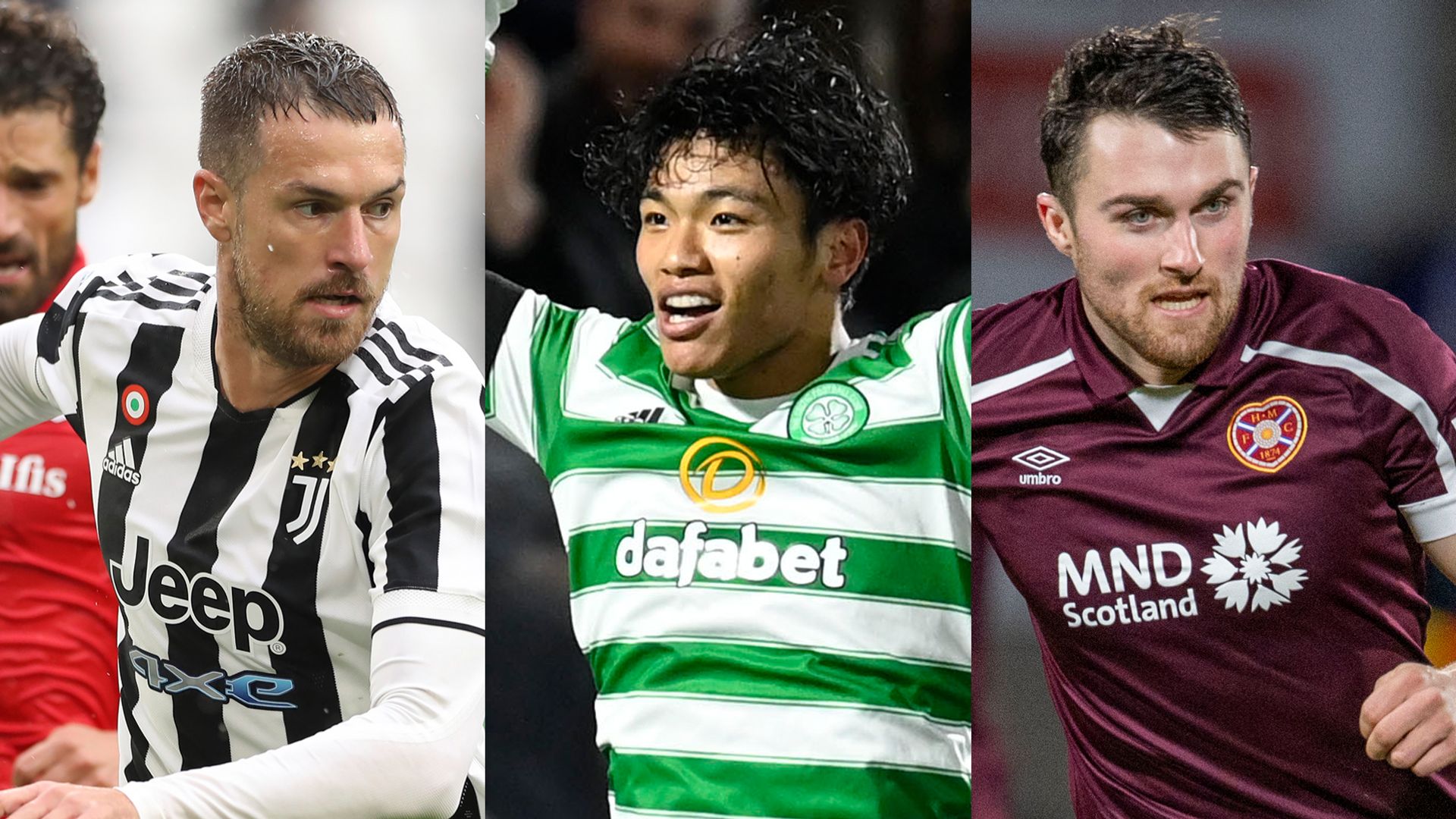 Rangers pulled off a stunning deadline day coup with Aaron Ramsey joining on loan as Celtic completed their transfer business early in the window.

The Wales midfielder has joined up with Giovanni van Bronckhorst’s side until the end of the season just as it looked like it was set to be a quiet window for the Ibrox club.

Ramsey, who was Rangers’ second deadline day arrival after full-back Mateusz Zukowski arrival from Lechia Gdansk, will help the Scottish Premiership leaders as they aim to beat Celtic in the title race.

In contrast, Celtic’s business was completed early in the window with three players joining on January 1.

Hibernian and St Johnstone made the most signings while Ross County were the quietest with just two players in at Dingwall.

Here is a breakdown of all the transfer business in the Scottish Premiership, club by club…

Manager Stephen Glass managed to hold onto Calvin Ramsay despite interest from a number of clubs, including Bologna.

Celtic left-back Adam Montgomery also moved north to join on loan until the end of the season.

There were some departures from Pittodrie, however, with Ryan Hedges moving to Blackburn Rovers on a three-year deal for around £200,000.

Ronnie Hernandez’s ill-fated spell in the north east ended as he made his stay at MLS side Atlanta United permanent.

Manager Ange Postecoglou was straight to business when the window opened with Daizen Maeda, Yosuke Ideguchi and Reo Hatate joining from Japan’s J-League.

Midfielders Ideguchi and Hatate joined on four-and-a-half-year deals while Maeda is on loan until the end of the season when his deal will become permanent.

Matt O’Riley opted to join Celtic on a four-and-half year deal despite interest from elsewhere and has already made an impact with impressive performances against Hearts and Dundee United.

Another arrival was 18-year-old Johnny Kenny, who moved from Sligo Rovers on a five-year contract.

James McPake moved to sign forward Niall McGinn from Aberdeen as he looks to keep Dundee in the Scottish Premiership following their promotion last summer.

McGinn, who scored 71 goals across two spells at the Dons, made his debut two days after agreeing an 18-month deal at Dens Park.

Fellow striker Zak Rudden joined on deadline day after signing a pre-contract earlier in the month.

The 21-year-old has moved to Dundee on loan until the end of the season, at which point he will become a permanent signing, while the club also secured midfielder Jay Chapman following his exit from Inter Miami.

A singing came with just an hour left of the transfer window with right-back Vontae Daley-Campbell joining on loan from Leicester City.

The Canada international, 28, spent the last six years in the MLS, playing 33 times for David Beckham’s Miami franchise after joining for their inaugural season in 2020.

Dundee United managed to land Tony Watt from Motherwell after the striker had already agreed a pre-contract at the beginning of the window.

Goalkeeper Carljohan Eriksson has joined as back up to number one Benjamin Siegrist after Trevor Carson moved to Morecambe on loan until the end of the season. 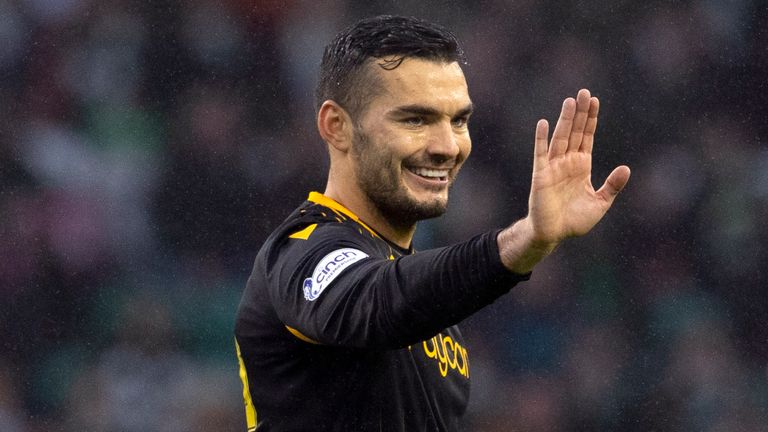 There was a loan signing for United on the final day of the window with young Arsenal midfielder Tim Akinola joining until the end of the season.

Robbie Neilson managed to strengthen his Hearts side as he looks to cement third in the Scottish Premiership and held onto one of his top players amid continued interest.

Nathaniel Atkinson joined from Melbourne City and will compete for the right wing-back position alongside the experienced Michael Smith after teenager Cammy Logan joined Edinburgh City on loan.

The 22-year-old, who is regarded as one of Australia’s emerging talents, arrived on a three-and-a-half-year deal for an undisclosed fee.

Defender Tony Sibbick, who had a loan spell at Tynecastle under former manager Daniel Stendl, returned to the club on a permanent deal after Barnsley reportedly rejected interest from Hibs.

Forward Ellis Simms made an instant impact after joining on loan from Everton, scoring on his home debut as Hearts beat Motherwell 2-0. 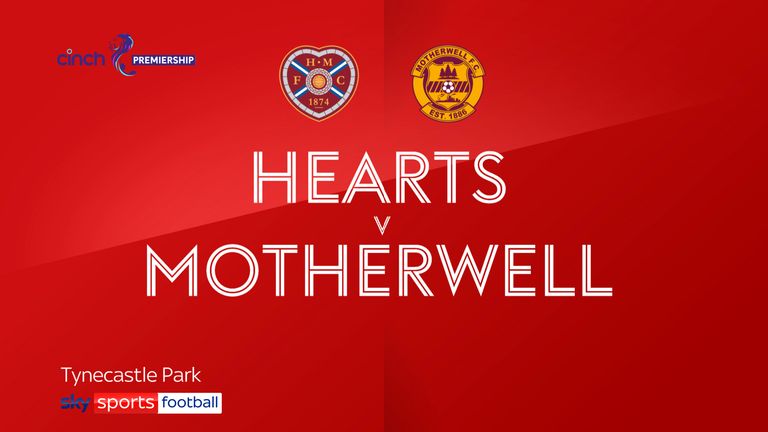 Highlights of the Scottish Premiership match between Hearts and Motherwell

Hearts rejected three bid from Rangers to take John Souttar in January after the defender signed a pre-contract and will move to Ibrox in the summer.

New manager Shaun Maloney wasted no time in reshaping his squad with eight players moving to Easter Road during the transfer window.

Hibs were busy in the early stages of the window, bringing in Harry Clarke, Ewan Henderson, and Elias Melkersen. A defender, a midfielder, and a forward; all versatile.

Clarke had impressed for Ross County on loan from Arsenal; Henderson was struggling for game time at Celtic and follows a similar path to brother Liam, while Melkersen is viewed as a raw Nordic talent who is more of a long-term project.

Defender Rocky Bushiri joined on loan to provide some much-needed cover at centre-back with left-back Demetri Mitchell arriving on a two-and-a-half-year deal from Blackpool.

American attacker Chris Mueller has moved to Edinburgh from Orlando City after having already agreed a pre-contract.

Winger Runar Hauge then signed a three-and-a-half-year deal on deadline day, becoming the second player to join from Norwegian sign Bodo/Glimt after Melkersen.

The Easter Road club made a late signing as winger Sylvester Jasper joined on loan from English Championship side Fulham, with the option for the move to become permanent at the end of the season.

Hibs did lose Martin Boyle to Saudi club Al-Faisaly in a deal worth around £2.5m plus add-ons after bids of £500,000 in December then £2m earlier this month were rejected.

Livingston boss David Martindale is hopeful goalkeeper Ivan Konovalov will be with the club soon after agreeing an 18-month contract.

The 27-year old Russian has yet to secure a work permit to officially make the switch from Rubin Kazan.

Defender Morgan Boyes moved to West Lothian from Liverpool on an 18-month-deal believing it is the „perfect“ club to take the much-needed next step in his career.

The Steelmen were relatively quiet in January but could not hold on to top scorer Tony Watt who made the switch to Dundee United.

Manager Graham Alexander made his signings early in the window with Ross Tierney, Joe Efford and Victor Nirennold joining the club.

Attacker Jordan Roberts meanwhile made his loan move from Hearts permanent and Celtic opted to send young midfielder Liam Shaw to Fir Park until the end of the season.

Ricki Lamie agreed a pre-contract with Dundee but a deal could not be agreed for the defender to move in January.

It’s a sharp contrast to last January when Graham Alexander had only been in charge for three weeks and made three signings on deadline day alone.

Robbie Crawford moved to Partick Thistle with Mich’el Parker also leaving, while Darragh O’Connor moved to Queen of the South on loan.

Rangers left their transfer business late and pulled off a major coup just hours before the window closed with Aaron Ramsey joining on loan from Juventus until the end of the season.

Manchester United winger Amad Diallo made an immediate impact after he moved to Ibrox on loan, scoring the opener in the 3-3 draw at Ross County. New loan signing Amad Diallo did not take long to make an impression on his Rangers debut, scoring the opening goal at Ross County after just five minutes

The 19-year-old moved to Old Trafford in a deal worth around £37.2m from Atalanta last year but has made just nine appearances in all competitions.

United believe this move will be good for his development, with Diallo understood to be a part of the Premier League club’s long-term plans.

Versatile youngster James Sands moved from MLS side New York City for 18 months – an option to buy is included in the deal.

John Souttar will move from Hearts in the summer after Rangers failed to bring the defender to the club before the end of the January window.

The Ibrox side also cashed in on Nathan Patterson with the young right-back joining Everton in a deal worth up to £16m. 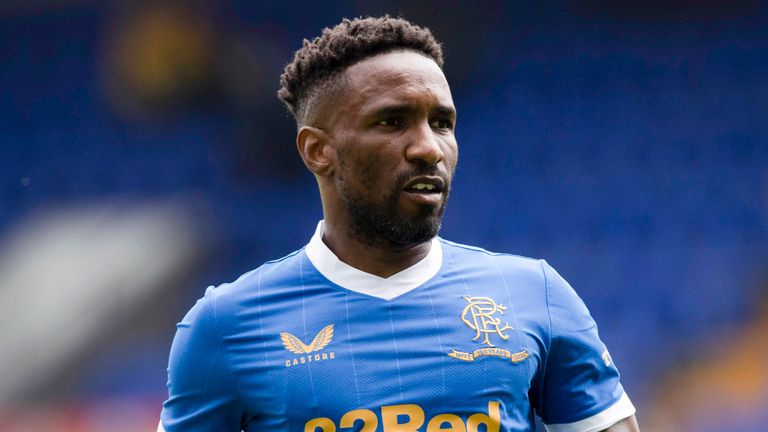 Jermain Defoe said it was difficult to accept his time at Rangers was coming to an end, but not playing was affecting him mentally

It was a very quiet transfer window for Ross County manager Malky Mackay.

He suffered a blow when in-form defender Harry Clarke was recalled by Arsenal only to sign a permanent deal with Hibs.

Two defenders did move to Dingwall until the summer – Kayne Ramsay from Southampton and Declan Drysdale from Coventry City. while Coll Donaldson left on loan until the summer, joining Dunfermline Athletic.

It was a busy January for Callum Davidson as he looked to find the answer to their Scottish Premiership survival.

There were seven new signings at McDiarmid Park, two of them strikers.

Former Dundee United and Celtic striker Nadir Ciftci joined until the end of the season. He has yet to score for Saints and is now facing a spell on the sidelines after injuring his hamstring on his home debut.

The 22-year-old forward Theo Blair also arrived from MLS side Vancouver Whitecaps until the summer of 2024.

Midfielder Melker Hallberg made the switch from Hibernian, joining Saints on an 18-month deal and Cammy MacPherson’s loan from St Mirren became permanent

With the second-worst goal difference in the league, Davidson has also brought in three new defenders in Tony Gallagher, John Mahon and Dan Cleary. Another defender, Tom Sang, also joined on loan from Cardiff City on deadline day.

Spencer Moreland did depart to join Stenhousemuir on loan, with Sam Denham moving to Cowdenbeath.

St Mirren manager Jim Goodwin was pleasantly surprised he was able to tempt Jordan Jones on loan from Wigan until the end of the season.

The former Kilmarnock and Rangers winger had several options as he looked for game time after a difficult spell down south. 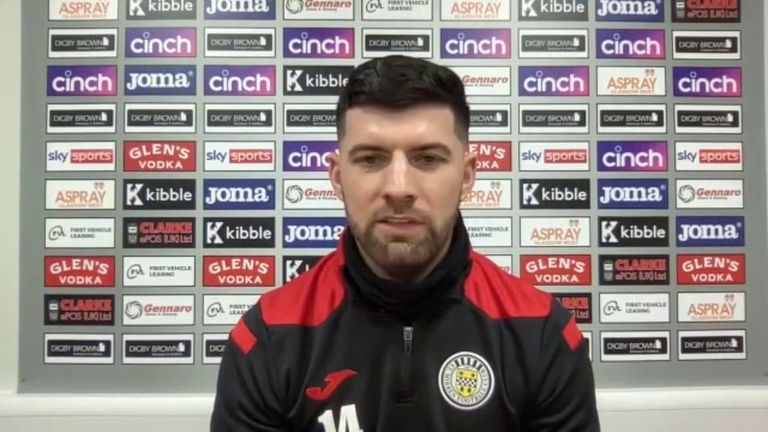 Goodwin finally signed Alex Gogic on deadline day, with the player arriving on loan from Hibs until the end of the season.

The manager has been a long-term admirer of the Cyprus international, having initially tried to sign him before he eventually moved from Hamilton to Easter Road.

The Buddies lost Jamie McGrath late on deadline day, with the influential midfielder joining Wigan Athletic on a 2-and-a-half-year deal.

Cammy MacPherson made his move to St Johnstone permanent after a loan spell. Out of favour Kristian Dennis moved to Carlisle United.

200 лв.
Rangers pulled off a stunning deadline day coup with Aaron Ramsey joining on loan as Celtic completed their transfer business early in the window. The Wales midfielder has joined up Заложи сега