The 23-year-old Pole, who joined the Easter Road club five years ago, was finally handed his first competitive appearance following an injury to regular number one Matt Macey.

And he made an important contribution to help his team claim a point from a game in which Hibs had the better of the first half and Hearts were on top in the second period. 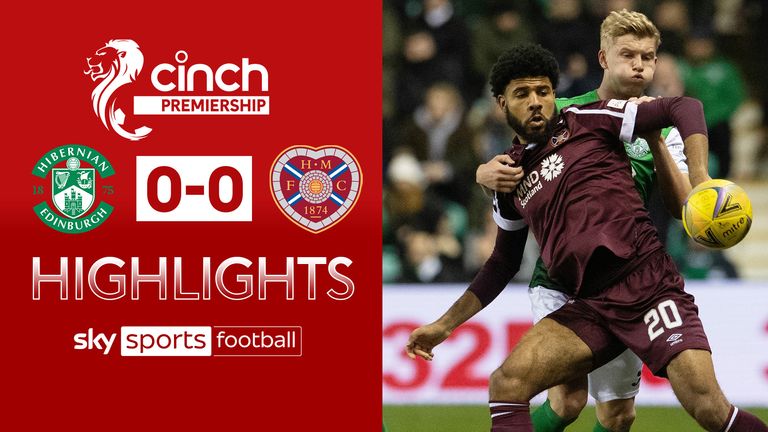 Highlights of the Edinburgh derby between Hibernian and Hearts in the Scottish Premiership.

The Easter Road side then almost grabbed a winner deep into injury time, with Toby Sibbick making a goal-line clearance from a Josh Campbell shot.

Hearts remain 12 points clear of their rivals and 10 points ahead of fourth-placed Motherwell.

There were two changes to the Hearts side that started the 2-0 home win over Motherwell, with Toby Sibbick – in for his first start since joining from Barnsley last week – and Barrie McKay replacing John Souttar and Gary Mackay-Steven.

The visitors had the first chance after six minutes when Beni Baningime chipped a ball over the top for Cammy Devlin, but the Australian midfielder couldn’t get his body shape right and hooked his effort well wide.

Hibs’ first opening came in the 10th minute when Mueller saw a shot from just inside the box well blocked by Stephen Kingsley after good work by Kevin Nisbet to set him up.

The hosts went agonisingly close three minutes later when Nisbet sent a close-range effort against the outside of the post after Doig’s header from a Newell free-kick broke to him inside the six-yard box.

Hibs thought they had taken the lead in the 17th minute when the ball came off Hearts defender Kingsley from a set-piece and ended up in the net but the linesman’s flag was up for offside in the build-up.

Hearts were claiming for a penalty in the 22nd minute when Lewis Stevenson clattered into Ellis Simms in the box, but referee Don Robertson waved play on before booking manager Robbie Neilson for his protests. 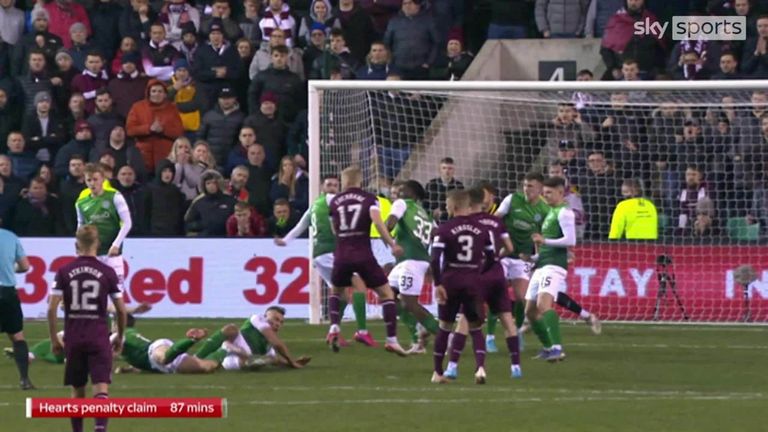 Hearts felt they ought to have been awarded a penalty when Lewis Stevenson blocked Alex Cochrane’s indirect free-kick but did the Hibernian defender use his arm?

The hosts’ tails were up and Christian Doidge got himself free in the 32nd minute after Sibbick’s slack pass was intercepted by Newell, but the English defender did well to get back and make a vital challenge just as the Welsh striker was about to pull the trigger.

Hearts threatened twice in the closing moments of the first half, with Liam Boyce seeing a first-time shot from the angle of the box pushed out by Dabrowski before Devlin fizzed a half volley inches over the bar from the edge of the area.

The visitors had a great chance six minutes after the break when McKay released Simms with a lovely pass but Dabrowski made an excellent save to deny the on-loan Everton striker.

The goalkeeper pulled off another couple of impressive saves to thwart Simms as Hearts enjoyed the bulk of the second-half pressure.

Hibs almost won it in the 90th minute when substitute Campbell saw a shot blocked on the line by Sibbick.

What the managers said 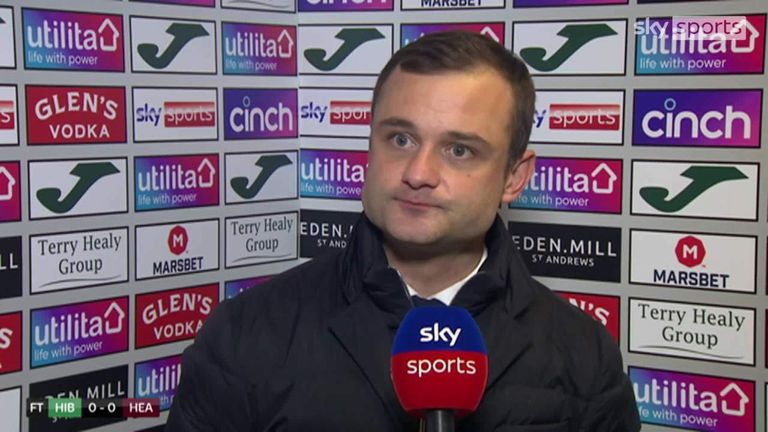 Hibs manager Shaun Maloney praised his players for their performance in the 0-0 draw against Hearts but felt they were not clinical enough when their chances fell to them.

„It was a proper derby. Both sides had chances and I think we showed a side of the game that we haven’t in the last few weeks.

„We competed incredibly well and created lots of chances, probably not clinical to win it at the end.

„His (Dabrowski) performance was outstanding as was Ryan Porteous. He was by far the best outfield player for us tonight.“ 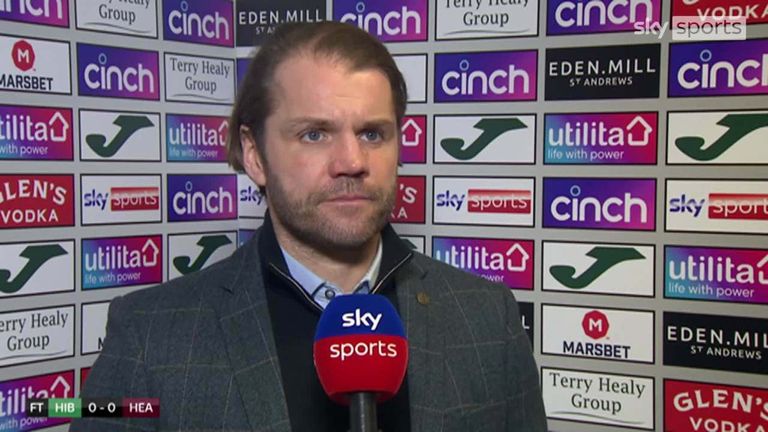 Hearts manager Robbie Neilson criticised referee Dan Robertson for his performance during the Edinburgh derby as he felt Hearts were denied two clear penalties during the 0-0 draw against Hibernian.

„I was pleased with our performance but disappointed with the referee’s performance.

„I think there were two key incidents that he’s got to make the right decision and didn’t.

„We could have come in at half time against 10 men, with a penalty and hopefully one nil up and then second half was a handball.

„He’s got to get these decisions right in big games.“

Hibernian host St Mirren in the Scottish Premiership on Saturday at 3pm while Hearts visit Rangers on Sunday at 4pm, live on Sky Sports Football.