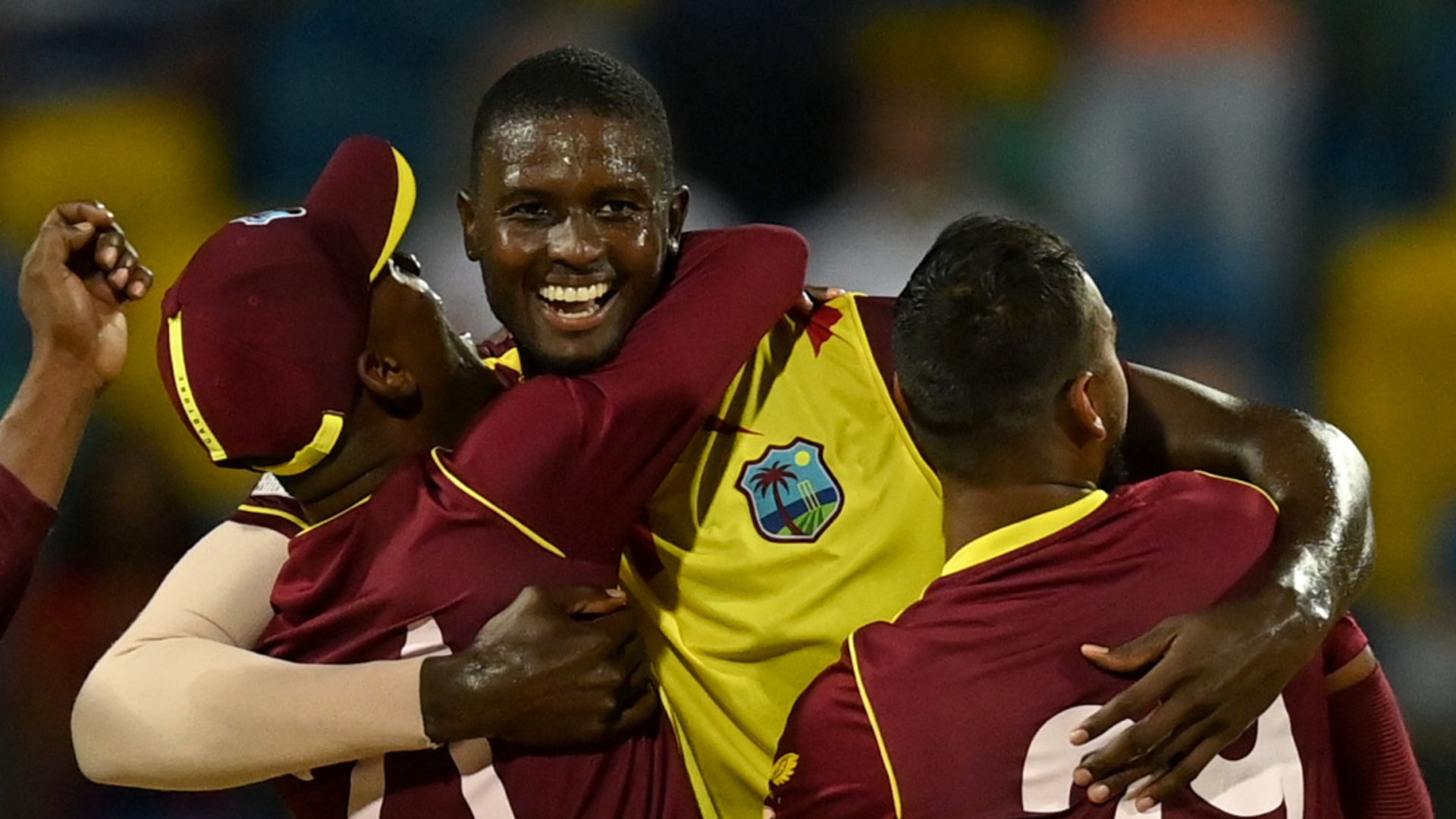 Jason Holder became the first West Indies player to take four wickets in four balls in a T20 international as his side wrapped up a thrilling 3-2 series victory over England.

Holder (5-27) dismissed Chris Jordan, Sam Billings, Adil Rashid and Saqib Mahmood to seal a 17-run win as England were bowled out for 162 in the fifth and final game in Barbados.

Adil Rashid had earlier become England’s all-time leading wicket-taker in T20 internationals, returning 2-17 to peg back West Indies before Kieron Pollard and Rovman Powell guided their side to 179-4 with an unbroken stand of 74.

James Vince top-scored with 55 from 35 balls to give England hope and Billings (41 from 28) kept their cause alive before Holder intervened with his spell of final-over drama to seal a West Indies win.

Pollard’s decision to bat after winning the toss – the first time either skipper had done so in the series – was initially justified as Kyle Mayers (31) and Brandon King (34) roared away with an opening stand of 59 from 40 balls.

Moeen Ali did extract immediate turn, with King deceived by one that went through him and, although Billings was unable to complete the stumping, it was clear that England’s spinners would again play a significant role.

Rashid made the breakthrough straight after the powerplay, with Mayers’ drive intercepted on the boundary by the leaping Jason Roy, who casually tossed it back for Phil Salt to take the catch.

West Indies sent Romario Shepherd up the order and he struck Liam Livingstone (2-17) for six before slicing him to backward point, while King miscued to long-on and England’s spinners began to apply the brakes.

Rashid’s flight deceived Nicholas Pooran (21) and clipped the top of off stump to lift the leg-spinner to the top of the wicket-taking charts, with West Indies grinding to a halt as seven overs passed without a single boundary.

But Pollard (41no from 35) and Powell (35no from 17) finally broke the shackles, with the latter hitting Jordan for successive sixes and Reece Topley also coming in for some punishment as the last four overs realised 66.

Roy was in no mood to hang around when England began their reply, launching Akeal Hosein’s first two deliveries for four – and he didn’t, sweeping the spinner onto his pad for Pooran to dive forward and take a looping catch.

Tom Banton (16) also began briskly, surviving a chance when Pooran failed to hold a legside glance off Odean Smith, but he departed later in the same over, mistiming a pull into the hands of Holder at mid-on.

Switching to slip for the arrival of the left-handed Moeen, Holder should also have sent him on his way first ball, shelling the chance as England’s stand-in captain fended off a sharply rising delivery.

Moeen (14) also got away with a top edge off Smith, but his luck ran out when he drove Holder straight to cover and Hosein then struck three times in quick succession to register career-best figures of 4-30.

Livingstone perished to a loose cut shot before Vince – who had just reached his second T20I half-century – picked out Fabian Allen in the deep and Salt was lured down the track, with Pooran taking off the bails.

England appeared down and out at 119-6, only for Billings to pummel Smith for two sixes and leave the visitors needing 21 from the final over – one that propelled Holder into the history books.

West Indies’ Jason Holder, who was named player of the series: „It probably wasn’t the best of starts for myself but I always try to stay in the game. You never know how this game can go.

„I love playing at Kensington Oval. We have the best fans in the world and I want to thank the England fans as well.“

England stand-in captain Moeen Ali: „West Indies were the better team and overall we didn’t adapt that well to conditions. But we played some good cricket and although we fell short, it was a good series.

„I thought West Indies were smarter than us today. We are good on flat wickets but we want to get better in conditions like these going forward.“

England’s men’s Test team return to action in March – also against the West Indies. The three-match series starts in Antigua (March 8-12) followed by fixtures in Barbados (March 16-20) and Grenada (March 24-28).

The white-ball side’s next assignment is not until June, when they travel to the Netherlands for a three-match ODI series.

England’s women’s team continue their Ashes campaign on Thursday with the first of three ODIs against Australia at Canberra (3.10am UK time).

The second game takes place in Melbourne on Saturday February 5, with the final match of the multi-format series two days later at the same venue. England can regain the Ashes if they triumph in all three ODIs.

In the semi-finals of the Under-19 World Cup, England’s youngsters take on Afghanistan in Antigua on Tuesday, live on Sky Sports Cricket from 1pm.