Guimaraes set for Newcastle medical on Friday ahead of £33m move Bruno Guimaraes is set to undergo a medical on Friday ahead of completing a move to Newcastle.

Guimaraes will take a medical in his homeland of Brazil after Newcastle agreed a package worth in the region of £33m plus add-ons with French club Lyon to sign the midfielder.

Arsenal were among a number of clubs interested in signing Guimaraes, who has also been watched closely by Manchester United and PSG, but Eddie Howe’s side are now on the verge of clinching the 24-year-old’s signature.

Guimaraes has made 25 appearances in all competitions for Lyon this season, registering six assists. He has three caps for the Brazil national team. 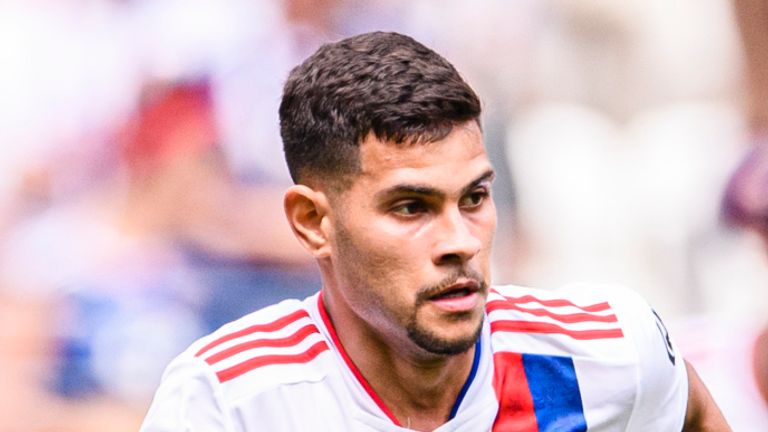 After Newcastle agreed a fee for Lyon midfielder Bruno Guimaraes, Anton Toloui explains what fans can expect to see from him

„He’s also a really hard worker which is an element of his game that is massively underappreciated. For example at Lyon this season, he’s covered more ground per game than any other player in that squad, so he really does put the work in as well.

„He’s playing the best football of his career at Lyon and is another player who has improved season upon season.“

Newcastle also want to sign Brighton defender Dan Burn, with one source telling Sky Sports News they have already made a £7m bid.

The Magpies have wanted to sign a left-footed centre-back all window to partner Jamaal Lascelles.

But they have so far failed in their attempts to sign Sven Botman, Diego Carlos and Benoit Badiashile.

Burn – a boyhood Newcastle fan born in nearby Blythe – is now a top target with four days left of the window.

The 29-year-old has entered the final 18 months of his Brighton contract. The 6ft 7in defender, who joined Brighton from Wigan in 2018, can also play left-back.

Meanwhile, Newcastle will be able to sign Diego Carlos if they offer Sevilla €45m (£37.5m) for the centre-back.

Carlos has turned down the offer of a new contract at Sevilla and would like to move to Newcastle, as Sky Sports News reported last week, but the Premier League club are currently refusing to pay more than about €30m (£25m).

Sevilla, who are currently second in La Liga and chasing their first title in 75 years, offered to almost double Carlos’ wages to match what he is being offered by Newcastle.

Sevilla consider €45m to be a fair price for a world-class defender who has been watched closely by Real Madrid, Manchester United, Tottenham and Arsenal.

They feel that if Newcastle were willing to spend £25m on 31-year-old Burnley forward Chris Wood then €45m is a fair price for Carlos.

However, it is thought Newcastle were initially informed the player would be available for around €30m and are beginning to feel that whatever they offer, Sevilla will continue to stall. Because of that, they are now looking elsewhere for defensive reinforcements.

FREE TO WATCH: Highlights from Newcastle’s win against Leeds in the Premier League

Carlos, for his part, is still hoping Sevilla can agree on terms for him to move to Newcastle but is aware that time is running out to complete any deal.

Newcastle giving up hope on Lingard

Newcastle have all but given up hope of signing Jesse Lingard.

The issue centres around the loan fee with Newcastle and Manchester United a long way apart on this valuation, with one source telling Sky Sports News the deal is now dead.

Newcastle were prepared to pay a fee for Lingard as well as the player’s full wages, and had been pushing hard to sign the England international before the end of the January transfer window.

Lingard himself has no intention of remaining at Old Trafford and was keen to go somewhere where he could play regular football.

Newcastle are now expected to look elsewhere for attacking reinforcements.

Lingard can leave for free in the summer and has no intention of remaining at Old Trafford beyond this season.

ОЩЕ:  Man charged after Digne and Cash struck by bottle at Everton

200 лв.
Bruno Guimaraes is set to undergo a medical on Friday ahead of completing a move to Newcastle. Guimaraes will take a medical in his homeland of Brazil after Newcastle agreed Заложи сега