Ulster hold on to beat Clermont in Belfast 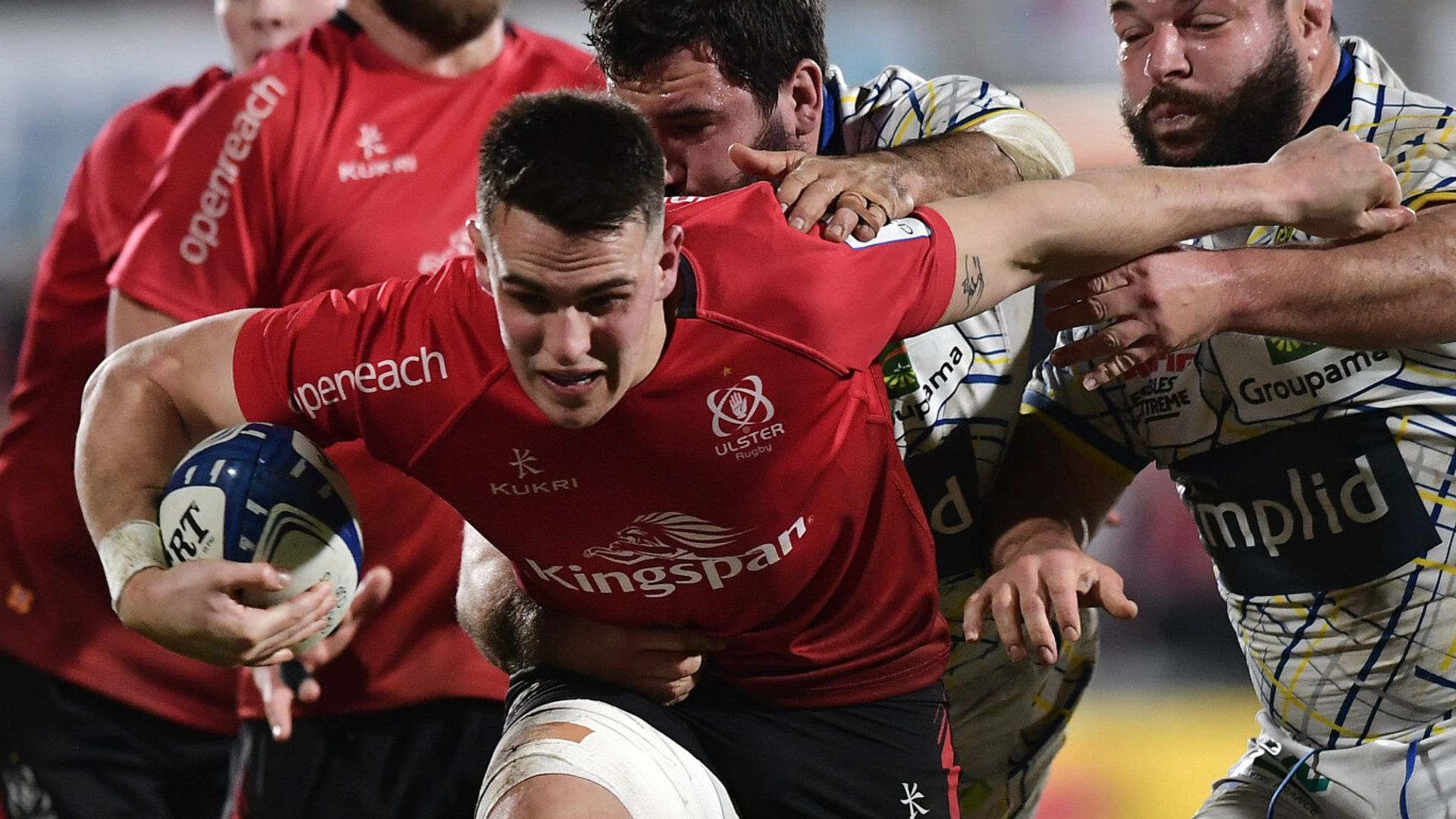 Ulster head into Champions Cup knockout stages as one of the top seeds after a bonus-point win vs Clermont at Kingspan Stadium; Hooker Herring scored twice following mauls, full-back Lowry scored again, No 8 Vermeulen notched his first for the club, while wing Baloucoune scored too

Ulster secured their place as one of the top seeds in the Heineken Champions Cup knockouts courtesy of an exciting 34-31 bonus-point victory over Clermont Auvergne in Belfast.

20-year-old scrum-half Nathan Doak – who only made his first European Cup start last week vs Northampton – added two conversions and a penalty in the win, which leaves Ulster assured of second in Pool A, and thus guaranteed home advantage in the Round of 16 second leg and quarter-finals, should they get there.

Clermont’s points came via the boot of scrum-half Morgan Parra, who kicked four penalties, and late Jacobus Van Tonder, Alivereti Raka and Judicael Cancoriet tries as they threatened the most unlikely of comebacks from 22 points behind.

A first-half yellow card to Raka – their greatest threat on the day – for repeated team infringements ultimately proved fatal, however, with Ulster scoring 17 points during his spell off the pitch.

Clermont meanwhile made some nine changes to their team that beat Sale last week, with the likes of Morgan Parra, Rabah Slimani and former Munster out-half JJ Hanrahan coming in. The French side kept Fritz Lee, Sebastien Vahaamahina, Camille Lopez and Damian Penaud on the bench.

Despite Clermont dominating possession with ball-in-play for virtually the first four minutes, it was Ulster who gained an early lead.

Clermont out-half JJ Hanrahan’s poor chip kick coupled with a penalty against the visitors for failing to roll away put Ulster within striking range, where their youthful backs played at a searing quick tempo and provided spark and energy.

Indeed, each of Lowry, Rob Baloucoune, Billy Burns, Angus Curtis and James Hume displayed a step or quick hands to make ground, forcing Clermont to give away two further penalties.

On each occasion, Ulster kicked to the corner, and eventually, Clermont could take no more as Herring broke off a tightly constructed rolling maul to score in the left corner.

Scrum-half Nathan Doak was unlucky to strike the post with the conversion from out wide, before Clermont responded with their first points five minutes later, as scrum-half Parra struck over a close-range penalty after Ulster had gone off-feet at the breakdown.

Clermont – a hugely physical outfit – grew into the contest with the likes of Alivereti Raka carrying hard, and when the pack forced a dominant scrum penalty against the head, Parra edged them in front off the tee.

The away side spilled the restart to put themselves back under pressure, however, allowing the superb Hume to stretch the Clermont defence again with powerful stepping and carrying into the 22.

Two penalties against Clermont followed, and after Ulster kicked to the corner and pounded at the try-line, full-back Lowry was on hand out wide to sprint in on an arcing run.

Again Doak couldn’t add the difficult conversion, leaving the score 10-6, but Clermont’s inability to defend under pressure without conceding several penalties would have been of huge concern to head coach Jono Gibbes – once of the Ulster parish between 2017 and 2018.

Directly off the restart, Clermont forced a penalty at the breakdown, though, and despite the concession of two early tries, Parra’s rather languid left boot ensured they were just a point down, slotting over from a slight angle.

An offside penalty in midfield put Clermont back into their own 22 just past the half hour, but unlike the previous two occasions, Ulster failed to be ruthlessly efficient as Herring’s lineout was overthrown.

A Curtis linebreak looked hugely promising soon after, but his offload while falling was just knocked on by Hume.

With Raka causing havoc each time he had ball in hand, Ulster’s was the next defence to be caught offside, allowing Parra to guide the ball over once more for a 12-10 lead.

A needless penalty for taking a man in the air followed by Clermont as the first half drew to a close, and this time the hosts would not pass up the chance – first forcing a yellow card to Raka of all people, due to persistent team infringements, before Herring dived over for his second.

Doak made no mistake with the conversion at the third time of asking, giving Ulster a 17-12 half-time lead.

Clermont began the second period sloppily – second row Paul Jedrasiak spilling the kick off under pressure from Baloucoune, before Hanrahan skewed a clearance kick straight off – and though they weren’t punished until six minutes in, Doak did then slot through a penalty.

That kick was the first time either side had lead by a score, and with Raka up and waiting to return from his sin-binning Ulster then struck a killer blow as Vermeulen got over for the bonus-point clinching fourth try after Lowry had just been stopped short.

Doak converted magnificently to leave Clermont 27-12 down upon Raka’s return and facing a mountain to climb.

The hosts then had an extra layer of comfort when Baloucoune scored in the corner after some sensational build-up running from Lowry – it was a score they would eventually rely upon.

34-12 down when Burns converted, it took until 10 minutes to go for Clermont to score their first try, as back-row van Tonder strolled in for what seemed little more than consolation after a nice team move up the left wing.

Within three minutes, they had their second when Raka touched down after more enterprising attack from deep, and when skipper Cancoriet touched down at the back of a rolling maul with four minutes left, the French side – as unlikely as it seemed – believed victory was on.

After countless phases deep in their own half following the restart, a Baloucoune tackle to put Raka into touch allowed Ulster to regain possession and see out the remaining minute, to the great relief of the 18,000 capacity crowd.

Both side’s must wait until Sunday to learn who they will face in April’s two-legged Round of 16 ties.

With Ulster guaranteed second place in Pool A, they look likely to be hosting defending champions Toulouse, who sit seventh in Pool B due to their Covid-19 induced 28-0 cancellation defeat to Cardiff.

Ulster will face Wasps if the Premiership side beat Munster at Thomond Park, or pick up two bonus-points in defeat.

Clermont, sat sixth in Pool A, must wait to see how Munster and Sale Sharks get on to learn their opponents. Should Sale beat Ospreys at home, Clermont will face Harlequins in the Round of 16.