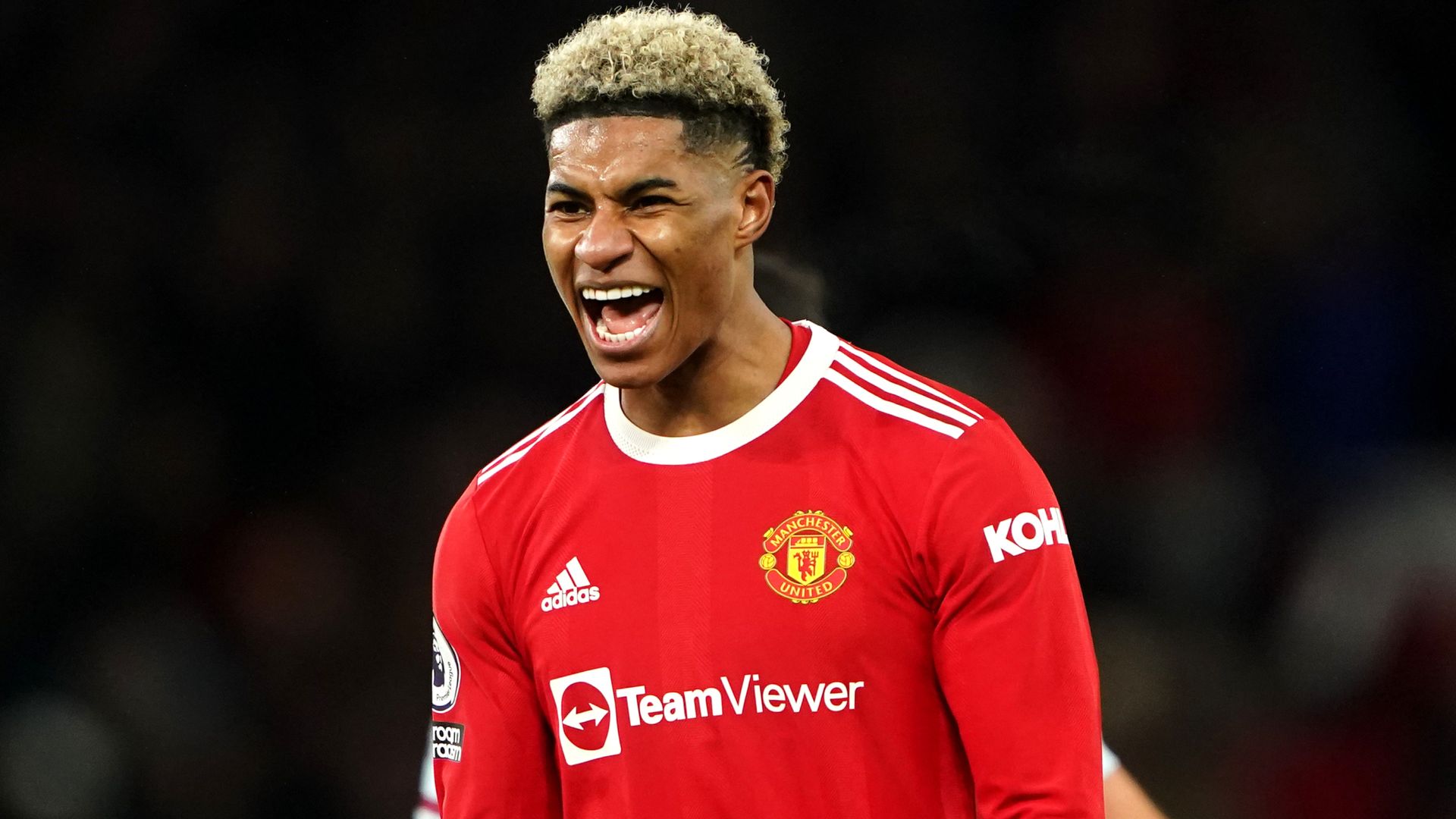 After a run of 11 games without scoring, and with his form under intense scrutiny, Marcus Rashford followed up his late strike against Brentford on Wednesday night with a crucial winner in the final minute of stoppage time against West Ham.

Ralf Rangnick’s side were seemingly heading for a goalless draw having failed to break West Ham down but, with only seconds remaining at Old Trafford, Rashford rushed in at the far post to convert Edinson Cavani’s low cross.

The goal propelled Manchester United above West Ham and into the top four, and it may prove just as significant for Rashford. „I think, for any forward, when you go through a patch of not scoring for a few games, it’s a great feeling when the goals do start coming back,“ he told Sky Sports after the game.

How he needed this. Rashford scored three times in his first four appearances of the campaign after returning from injury in October but the subsequent months brought nothing but frustration, his poor form eventually prompting Rangnick to use teenager Anthony Elanga ahead of him.

Rashford is not the only one to have struggled to hold down a place in United’s attack, of course. The same is true of Anthony Martial and Jadon Sancho. But with two goals in four days, he may just have reignited his own season as well as United’s top-four bid.
Nick Wright 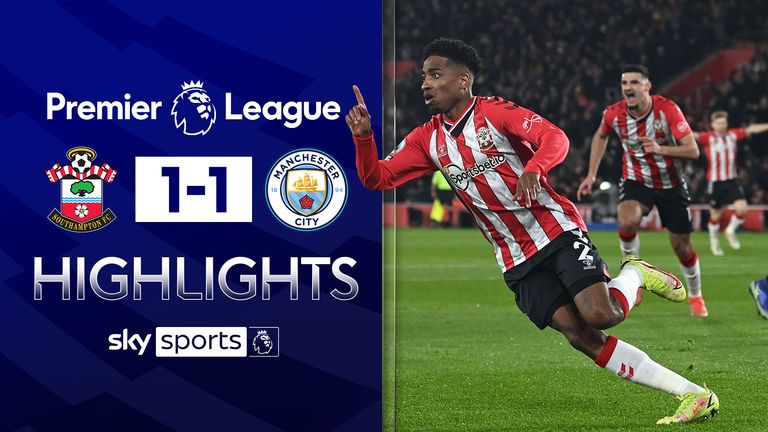 FREE TO WATCH: Highlights from Southampton’s draw with Manchester City in the Premier League.

The number of times you type the name of a player out when live blogging a game tends to be a clue about how involved they were in the action. The words ‘Jack Grealish’ did not have to be typed out too many times in Manchester City’s draw with Southampton.

It was another performance where the England midfielder was on the edges of the game rather than at the heart of it. He only had 56 touches of the ball against Saints. Phil Foden had 90, Kevin De Bruyne had 95. Hey, even Ederson had 31.

It points to perhaps a lack of confidence in a player that has built a career on going searching for the ball even in the most testing of times.

Pep Guardiola does not seem worried, though. He had the chance to hook Grealish at any point during this underwhelming showing but decided to switch Raheem Sterling for Gabriel Jesus in his bid to change the momentum of the game. In typical Pep style, it worked the oracle as City enjoyed their best spell of the match with the introduction of the Brazilian. Not that Grealish played too much of a part in the fightback.

In 17 Premier League games this season, Grealish has just two goals and two assists to his name. His last goal involvement came during the 7-0 drubbing of Leeds in December.

In a numbers-focused industry that is a debatable return for a player that cost Manchester City £100m in the summer.
Lewis Jones 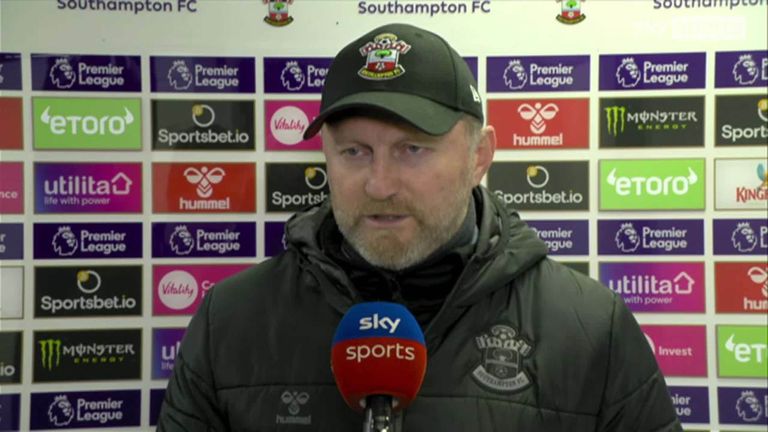 Southampton manager Ralph Hasenhuttl spoke of his pride at remaining unbeaten in the Premier League against Manchester City this season.

Southampton are a team going places with a manager that is proving he is a dab hand at significantly improving players without the need to spend big money.

Just look at their two outstanding performers in this impressive draw. Walker-Peters, a £12m purchase from Tottenham, scored a goal that Guardiola would have been proud of if his team had scored it while Salisu, a £10.9m investment from Real Valladolid, put in his best performance in a Southampton shirt to repel City’s array of attacking stars. He is getting better and better under the watch of Hasenhuttl.

Hasenhuttl’s style of football, which demands non-stop pressing, creativity from out wide, and a team focused on turning oppositions with quick counter-attacking football, caused City problems in transitions. The direct running of Armando Broja meant Aymeric Laporte and Ruben Dias could never switch off.

When his team are hot, Southampton are hot. However, inconsistency has hindered progress, to the extent he was nearly dismissed after an embarrassing 9-0 thrashing by Leicester in October.

The remarkable turnaround has won Hasenhuttl and the club plenty of admirers. That the Southampton hierarchy stood by their man and he rewarded that faith, suggests an impressive structure within the club is in place. To avoid defeat in two matches this season against the team running away with this Premier League title is a remarkable achievement. Hasenhuttl is an elite manager. He deserves more respect for the job he is undertaking.
Lewis Jones FREE TO WATCH: Highlights from Wolves’ win against Brentford

From the ridiculous to the sublime. At one stage, you wondered whether Wolves’ 2-1 win at Brentford would ever end after three separate stoppages – most bizarrely when an unauthorised drone forced a 19-minute halt to proceedings in the opening period.

But Joao Moutinho and Ruben Neves have been providing moments of quality throughout their respective careers. Moutinho’s opener – according to Opta’s expected goals metric – had an xG of 0.06 while Neves’ winner came from an xG of 0.07. In total, Wolves’ collective xG was 0.27 compared to Brentford’s 1.47.

Bruno Lage’s side continue to defy the statistics but are certainly a force and cannot be ruled out of the race for the Champions League at this rate, extending their unbeaten run to six games in all competitions. Indeed, the Midlands club have started a calendar year with three consecutive league victories for the first time since 1994.

They arrived in West London eighth in the table, where they remain having dropped only two points in their last five Premier League games, but they are now only four points behind fourth-placed Manchester United with a game in hand.

On this evidence, Lage will not need to do too much strengthening in the remaining days of the January window.

„We’re on our way to Europe,“ sang their supporters. They have been going under the radar this term, but their intentions are now being heard loud and clear. The top six is firmly in their sights, and who knows what lies beyond that?

With Arsenal and Tottenham coming up next, Lage will hope the winter break does not halt their momentum.
Ben Grounds

FREE TO WATCH: Highlights from Norwich’s win over Watford

Norwich’s 3-0 win over Watford on Friday could prove a result of real significance, with the Canaries moving out of the relegation zone for the first time this season at their opponent’s expense.

Dean Smith said afterwards: „For a long period of the game I was happy but I wasn’t happy in the final 15 minutes as with a man advantage we should have done better with the ball. But to get the win was the main thing today.

„Two games ago we were thinking it was between four of us, after getting six points in two games you can maybe look ahead and start grabbing others into the battle. Winning back-to-back games in the Premier League is a massive boost for everybody.“

Norwich are now believing survival is within their grasp. Smith confirmed his players will have six days off across the next fortnight to recharge their batteries, and it is certainly a well-earned break.

Yes, Watford have two games in hand to go with the two points they need to make up, but there has been a visible shift in momentum among Smith’s players, typified by two-goal hero Josh Sargent. Norwich demonstrated the type of fight and hunger that both Burnley and Newcastle must show if they are to have any chance of clambering back from off the canvas in the second half of the season.

This could represent a huge week in Norwich’s fight against relegation, and largely thanks to the American Sargent, who provided the spark to take all three points.

Norwich captain Grant Hanley summed up the mood in the away dressing room after this seismic result at Vicarage Road.

„It’s a big result for us at an important time and back-to-back wins is tough to do in the Premier League,“ he said. „Now we have time to rest with the break but we have to be better. We got the three points, that is what matters.

„I’m over the moon for Josh, he deserves it, he works unbelievably hard and the lads love him, he is a top, top lad. They were [top finishes] and it has been a long time coming.“
Ben Grounds

FREE TO WATCH: Highlights from Newcastle’s win against Leeds

All good things come to those who wait and that includes Premier League wins on the road, as Newcastle found out on Saturday.

Not many people would have predicted Eddie Howe’s side coming away from Elland Road with all three points. But after a resolute display, the visitors held on to record a massive 1-0 victory, the north-east club’s first away league win of the season at the 10th time of asking.

Sure, the victory was slightly fortuitous in that Newcastle often rode their luck at times, while Jonjo Shelvey’s second-half winner owed a lot to a mistake by Leeds goalkeeper Illan Meslier.

However, you make your own luck in football, as the old adage goes, and that was certainly the case on the weekend as the visiting players ran themselves into the ground to protect their narrow lead.

That led to unwanted injuries to Joelinton, Paul Dummett and skipper Jamaal Lascelles, although the club’s trip to Saudi Arabia for a warm-weather training camp may help to soothe some of those aches and pains ahead of their next clash at home to Everton on February 8.
Richard Morgan

200 лв.
Man Utd reignited by Rashford Please use Chrome browser for a more accessible video player FREE TO WATCH: Highlights from Manchester United’s win against West Ham After a run of Заложи сега