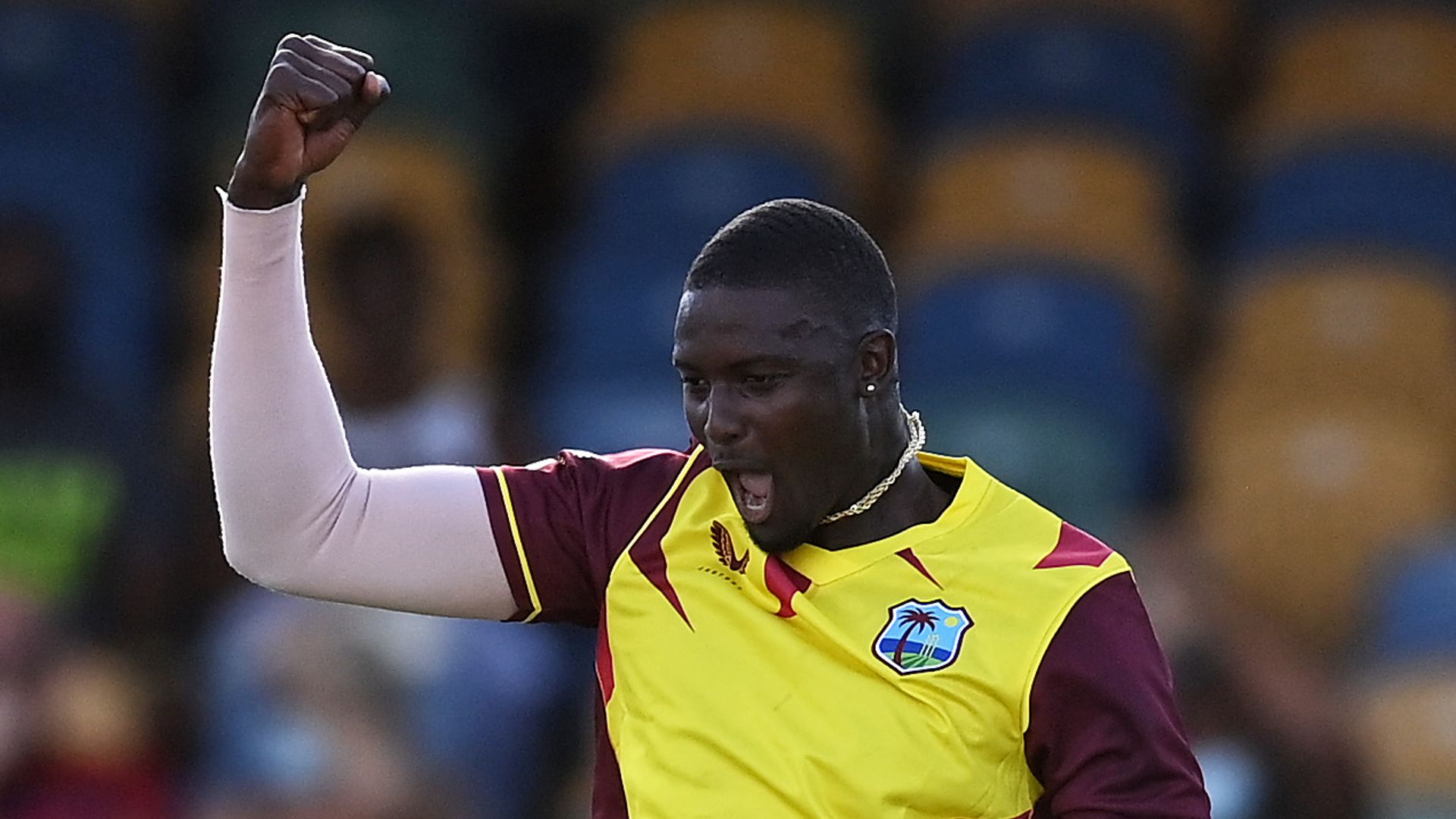 West Indies beat England by nine wickets in the first T20 international to take a 1-0 lead in the five-match series; Jason Holder took 4-7 as the tourists were bowled out for 103; Brandon King then hit an unbeaten 52 as the hosts eased to victory with 17 deliveries to spare

Jason Holder took 4-7 as England were bowled out for 103 on their way to a comprehensive nine-wicket defeat to West Indies in the first T20 international in Barbados.

England quickly found themselves in trouble after being asked to bat as Holder and Sheldon Cottrell did damage with the new ball, reducing the visitors to 10-3 which swiftly became 29-5 and then 49-7.

It took a 36-run stand between Chris Jordan (28) and Adil Rashid (22) for the eighth wicket to take England up to anything close to respectability before Holder wrapped up the innings with two balls to spare.

Brandon King then hit an unbeaten 52 as West Indies calmly knocked off the runs with 17 balls to spare to take a 1-0 lead in the five-match series.

The one positive for England is that they have less than 24 hours to wait before trying to put things right, with the second T20 taking place at the same venue on Sunday.

ОЩЕ:  Champ goes on trial for Cheltenham in Cleeve Hurdle

At the toss, Eoin Morgan insisted that he would have chosen to bat first as they aim to work on setting a total ahead of another T20 World Cup at the end of the year and if it was a challenge he wanted, he got it as three wickets fell in the first two overs.

Jason Roy (6) was first to go, losing his middle stump as he advanced to Cottrell, the ball after advancing to smash the left-arm seamer for six. Then it was over to Holder.

The big all-rounder found a hint of swing and was able to use his height to extract extra bounce from the surface, with that combination helping him to find Tom Banton’s (4) outside edge. Nicholas Pooran took the chance at slip.

Moeen Ali came and went, slashing his first ball to backward point to put Holder on a hat-trick. He could not quite get it but batting was proving extremely difficult and two maidens followed before James Vince got after Cottrell (2-30).

Back-to-back boundaries were followed by a top-edged hook for six, only for Vince (14) to slap the next ball – short, wide and begging to be hit – straight to cover and become the second of three England batters to fall the ball after hitting a maximum.

The early damage had been done by the seamers but Akeal Hosein showed there was plenty in the pitch for the spinners too, ripping the ball past Sam Billings (2), who was stumped by a mile to end the seventh over.

Morgan and Liam Dawson (2) tried to rebuild and got through to the halfway stage of the innings but a calamitous run out the ball after drinks saw the latter heading back to the pavilion and Morgan (17) was not far behind, smashing Romario Shepherd over the offside for six before being deceived by a slower ball next up and picking out Kieron Pollard at cover.

Jordan and Rashid did at least manage to provide some resistance over the next five overs, Jordan clubbing three big sixes before he holed out off Fabian Allen in the 17th over and then it was left to Holder to wrap up the innings, castling Rashid the ball after dismissing Saqib Mahmood (5).

England desperately needed early wickets to give them any chance of defending such a low total but with the West Indies not needing to take any risks and the pitch having steadily improved through the match, none were forthcoming.

King and Shai Hope eased through the powerplay, smartly playing the situation and turned the chase into something of a non-event.

Rashid (1-21) removed Hope (20) with a superb leg-break, Billings with quick hands to complete the stumping, and Dawson (0-12) offered as much threat as any England bowler in a tidy spell, but the result was never in doubt.

King and Pooran (27no) steadily took the home side towards their target before King, the over after bringing up his second T20 fifty from 47 balls, hit the winning run from the first ball of the 18th over.

After a disappointing start, England will aim to bounce back on Sunday and show why they are the No 1 ranked T20 side in the world.

England captain Eoin Morgan: „West Indies dominated the game early on. We lost early wickets, we didn’t seem to adapt well enough in running, which is what you have to do when challenged like that with movement and a bit of bounce. We’ll have to come back tomorrow with a fresh game-plan and try to execute it better because I think conditions have a chance of being very similar.“

West Indies captain Kieron Pollard: „That’s the blueprint we ask guys to put up. Really happy for the guys. To come out and win a match isn’t easy, to see the young guys come out and finish it off was fantastic. Sometimes when you get four wickets early guys can relax, but they know the importance of sticking to plans. This is just the first of five, but winning games isn’t easy at all.“

England and West Indies face off again in the second T20 international from 8pm on Sunday with games on January 26, 29 and 30 completing the five-match series.

Meanwhile, Heather Knight’s England side will aim to level things up in the Women’s Ashes as they take on Australia in the third T20 in the early hours of Sunday morning. Australia lead the multi-format series 3-1.

200 лв.
West Indies beat England by nine wickets in the first T20 international to take a 1-0 lead in the five-match series; Jason Holder took 4-7 as the tourists were bowled Заложи сега