Mikel Arteta has hit back at Tottenham’s criticism of Arsenal for having Sunday’s north London derby postponed, saying the Gunners would never publicly question an opponent’s motives for requesting to have a game called off.

Arsenal asked for the Premier League clash to be postponed, claiming they had „many players unavailable across our squad as a result of Covid, injuries and players away with their countries at AFCON (Africa Cup of Nations)“.

The request was granted by the Premier League on Saturday, with Spurs then releasing a statement saying the decision was „very surprising“ while their head coach Antonio Conte said on Tuesday that only Covid cases should be taken into account when the league chooses whether to call off matches.

Arteta refused on Wednesday to reveal which players may be able to return for Thursday’s Carabao Cup semi-final second leg at home to Liverpool – live on Sky Sports – but strongly defended his club’s actions.

„We didn’t have the players necessary to have a squad available to compete in a Premier League match,“ he said. „That is 100 per cent guaranteed.

„I don’t know if I understand. I’m telling you what we’ve done. If a team has come to us and said, ‘we cannot play and here are the reasons we cannot play’, and the game has been postponed, we have never publicly questioned any of that, and we will not

„That’s why we have the Premier League, the FA (Football Association) and the regulators to consider, to find out and do the necessary due diligence to postpone a match to try to maintain the fairness of the competition.

„We know that we did the right thing. I think if anything, we’ve been very, very honest.

„We will defend our club tooth and nail. We’re not going to have anybody damaging our name or trying to lie about things that haven’t occurred.

„If we make mistakes we will put our hand up, but we will defend our club in a really strong way.“

The Premier League and Arsenal have come in for criticism following the weekend’s decision, with Paul Merson telling Sky Sports he „cannot believe“ his former team got the match postponed.

But Arteta accused critics of hypocrisy and cited the Covid outbreak Arsenal endured at the beginning of the season – which contributed to them losing their first three league games of the season – as well as their lack of player availability for this month’s FA Cup defeat at Nottingham Forest and last week’s Carabao Cup tie at Anfield.

„This is a no-win situation,“ argued Arteta. „When we played the first three games of the season we were killed with people saying, ‘don’t be naive – if you have that many players out, don’t play with your kids’.

„Now we postponed a match for all the right reasons, believe me, and you get that reaction. But I think that’s normal.

„We got to the point where we could not get a squad available as is required in this league to play a game. That’s why we didn’t play – as simple as that.“ 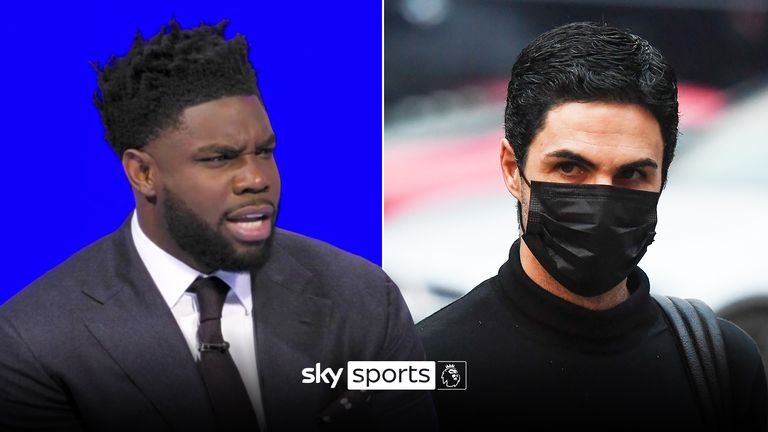 The Premier League says it is consulting with its clubs over possible changes to its rules regarding match postponements.

As well as Merson, Gary Neville and Jamie Carragher also told Sky Sports last week that changes needed to be made to prevent teams from being able to have games postponed because of player unavailability caused by injuries and international call-ups, as well as Covid cases.

In a statement on Wednesday, the Premier League said it „is consulting with our clubs regarding COVID-19 postponement rules and guidance in light of the changing national picture and the falling number of cases within our squads.“

It added: „The league’s current guidance was amended in December following the emergence of the new Omicron variant and we continue to monitor the ongoing effects of the virus and will update our guidance accordingly.“

It is hoped any changes to the rules can be introduced in time for the first fixtures in February.

Arteta was able to shed some light on the curious situation of Pierre-Emerick Aubameyang, who was sent back from the Africa Cup of Nations by Gabon after they claimed he had developed „cardiac lesions“ following a bout of Covid.

The striker – who was stripped of the Arsenal captaincy for disciplinary reasons earlier this season – was forced to deny that similar behavioural concerns were not the reason for his early departure from Gabon’s AFCON campaign.

Arteta said: „He’s in London and now he’s going through some examinations because we haven’t had any clarity from the Gabon national team about the reasons why he came back.

„Obviously it’s our obligation to make sure that medically he is safe and in good condition. Historically, with everything we’ve done with the player, he has never had that issue.“

Merson: Too easy to get games called off

In his latest Sky Sports column, Paul Merson said: „As soon as Arsenal’s Carabao Cup semi-final first-leg at Liverpool was over, and Mikel Arteta said he would have to play Bukayo Saka, Gabriel Martinelli and Albert Sambi Lokonga in midfield in Sunday’s north London derby, I thought the game was bang in trouble.

„I did fancy Arsenal to win at Tottenham before all of the injuries and Granit Xhaka’s suspension, but not after that. I mean, who was going to play in midfield?

Gary Neville and Jamie Carragher have their say on whether Premier League clubs should be allowed to call matches off due to Covid, injuries and the Africa Cup of Nations.

„That said, I just cannot believe they got the game called off.

„These clubs have spent a lot of money on academy football, on giving young kids a chance. How would those players feel when the manager turns around and says he hasn’t got any players?

„I can understand if the cancellation is due to Covid, if there are 10 cases in the camp and players have to do the right thing and isolate. But when you’ve got one Covid case but you’re getting a game called off because you’ve got seven injuries? Come on. It’s becoming too easy to get games called off.

„In lockdown there was all this talk about the importance of the fans. Now they have called a game off so late. How many people will have travelled from afar and booked hotels to come to this big football match? There is no care for the fans.“

What are the Premier League rules around postponements?

The 2021/22 Premier League handbook included Covid protocols and stated the Premier League’s board will „only permit the rearrangement or postponement of a league match in exceptional circumstances“.

The board make calls on a case-by-case basis, and by way of guidance the Premier League says permission for a postponement will not be granted if a club have 14 or more players from their squad list available.

However, after the postponement of a number of games in the weeks leading up to Christmas, a new Premier League guide explaining match postponement protocols was published.

And there, these factors are considered when deciding whether to postpone a top-flight game:

1) The impact of COVID-19 infections on a club’s squad, as well as injuries, illness and those isolating, and the number of players available on the squad list and any Under-21 players with appropriate experience. Where a club cannot field 13 outfield players and a goalkeeper either from its squad list or its appropriately experienced Under-21 players, the match will be postponed.

2) The status of any COVID-19 outbreak within a club, including the number of individuals affected, the sequence and source of infections and their proximity to the match in question.

3) A club’s ability to safely prepare its players in the lead-up to a match.

4) Medical advice as to whether there is any unacceptable risk to the health and safety of players and staff by playing the match.

5) Any advice from UK Health Security Agency and other public bodies.

6) Any other exceptional circumstances.

Which Premier League games have been called off?

Everton vs Leicester – Tuesday January 11 (as above, this game had already previously been postponed from its original Sunday December 19 date)

Burnley vs Watford – Tuesday January 18 (as above, this game had already previously been postponed from its original Wednesday December 15 date)

Follow every Arsenal game in the Premier League this season with our live blogs on the Sky Sports website and app, and watch match highlights for free shortly after full-time.

Get all this and more – including notifications sent straight to your phone – by downloading the Sky Sports Scores app and setting Arsenal as your favourite team.

200 лв.
Mikel Arteta has hit back at Tottenham’s criticism of Arsenal for having Sunday’s north London derby postponed, saying the Gunners would never publicly question an opponent’s motives for requesting to Заложи сега